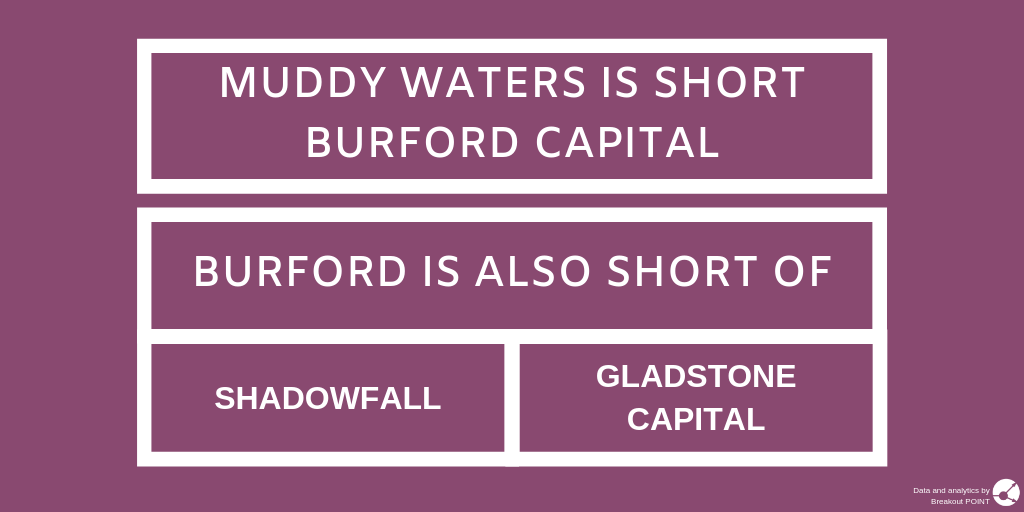 Discover the latest short positions by activists and HFs. Sign up for Breakout Point!

(Updated on 2019-08-07 at 16:00 UTC with the latest response by Burford Capital, the latest short positions and stock price movements)

Muddy Waters published a negative research report on Burford Capital this morning by focusing, among other things, on accounting and liquidity issues. Stock closed about 46% lower today, while being as much as 66% down on intraday basis.

Following the report, Burford Capital has issued a related statement, saying that it will review the report and respond to it as rapidly as possible. They also re-iterated key points from an announcement they issued in the early morning today (ref. Burford). In the afternoon, Burford issued a third statement saying that the Board of Burford Capital Limited "believes that the report's criticisms are without merit" and that Burford principals intend to purchase Burford shares for their personal account, after publishing detailed response to the Muddy Waters' report (ref. Burford).

Previously, on July 25, ShadowFall, UK-based research and fund management firm with focus on short activism, tweeted views about their short position in Burford, saying: "Burford has a pretty strong inverse relationship between its profitability and cash flow." (ref. Twitter). Since their Burford short call and, as of yesterday's close, stock is down about 32.8%. Note that ShadowFall publicly mentioned that they are short Burford, already on June 28, but without elaborating why. Burford CEO mentioned, in an interview, that ShadowFall's criticism was “a little naïve” (ref. Bloomberg Law).

This is not the first time that ShadowFall and Muddy Waters appear with short calls focusing on the same stock. Back in February 2018, both published negative reports on UK-based semiconductor company, IQE plc (stock down more than 46% since).

Burford closed yesterday about 18% lower. Shortly after Muddy pre-announced today's report, without naming the stock, speculations that Burford might be a subject of Muddy's report started popping-up on Twitter. This morning and prior to Muddy Water's report, Burford issued a statement, saying that it believes that yesterday's price movement relates to "a rumour of a potential short attack or bear raid" (ref. Burford). 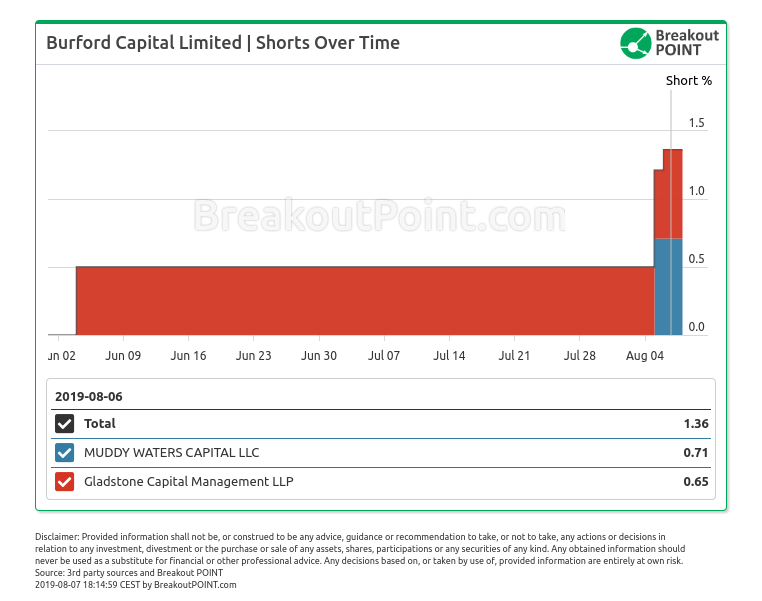 Muddy Waters Capital's short disclosures appear only sporadically in our EU short selling records. Previously, Muddy Waters Capital popped-up with short positions in Solutions 30, IQE, Stroer, Casino Guichard-Perron and Rallye. Except for Solutions 30 short, all these short positions were accompanied by public activist short reports. In case of Solutions 30, Muddy Waters did not elaborate why they shorted this stock and just commented: "Whose investors are better off - those who can evaluate our arguments, or those whose stock drops but they don't understand why?"(ref. Twitter). However, appearance of Solutions 30 short, was followed by an about 25% lower close on the day after the short disclosure and was followed by five hedge funds disclosing new big shorts (ref. Breakout Point).

Get 15% off in August with code "sgCWZyYs" (limited availability). Join Breakout Point!

* Note: Presented short selling data is based on European net short position data which is disclosed to the public when short positions at least equal to 0.5% of company issued share capital. Presented data and analytics is as of available on 2019-08-07.