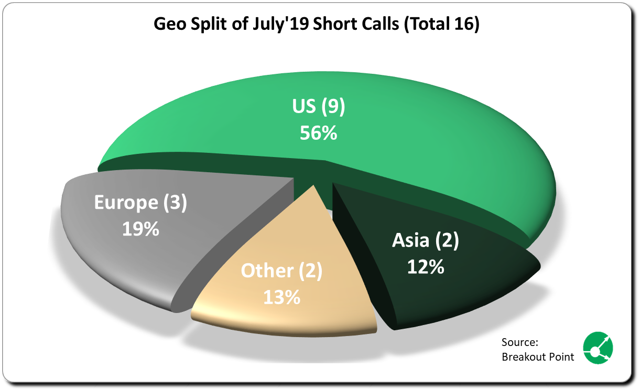 We recorded three major short calls in Europe during July. This is almost as many as in whole of H1 (four new short reports). Two of the short calls were by UK-based research specialists, ShadowFall, focusing on auditing at France listed Eurofins Scientific (-2.5% since) and cash balances at UK listed Burford Capital (-14.5% since). Quintessential Capital Management (QCM) put out multiple concerns about Italian bio-plastics firm, Bio-On, whose market cap shrank from about €1b to about €0.35b since QCM's report. Trading in Bio-On was halted several times and the stock was down as much as 76.5% vs prior to the report. A number of funds holding big short positions profited from this plunge, including Ennismore and Engadine.

On average, targeted US stocks went down 14%, while targeted European stocks lost 27%.

In Asia, China's Biggest Sportswear company, ANTA Sports, was subject of a report by famous US activist short-seller Muddy Waters. Following company clarifications and several follow-ups by Muddy Waters, stock is about 4.2% higher than prior to this report. Interestingly, ANTA Sports was also in focus of Blue Orca Capital at Sohn Conference in May 2019. One of the most recent activist short campaigns is, also, in terms of % drop, the most successful of all that came out in July. On 29th of July, Emerson Analytics published a report on Southern Energy Holdings Group, which was followed by a trading halt and a drop of about 89% on Friday, the day when company published clarification announcement and the trading was resumed.

Sector-wise, yet again, we recorded the most (six) short reports focusing on healthcare companies. 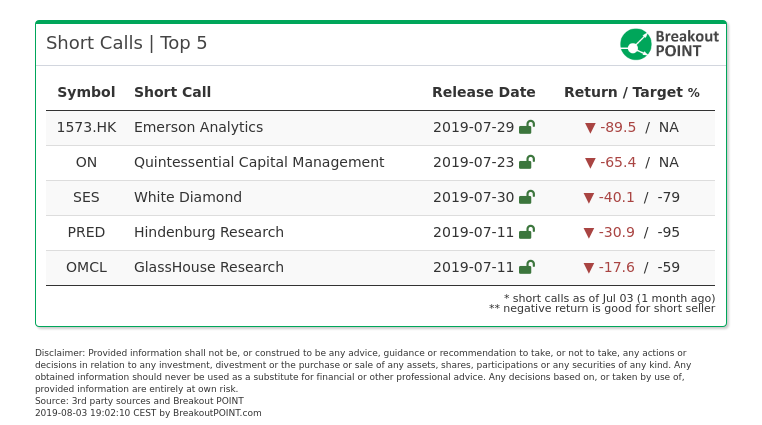 Get 15% off in August with code "sgCWZyYs" (limited availability).