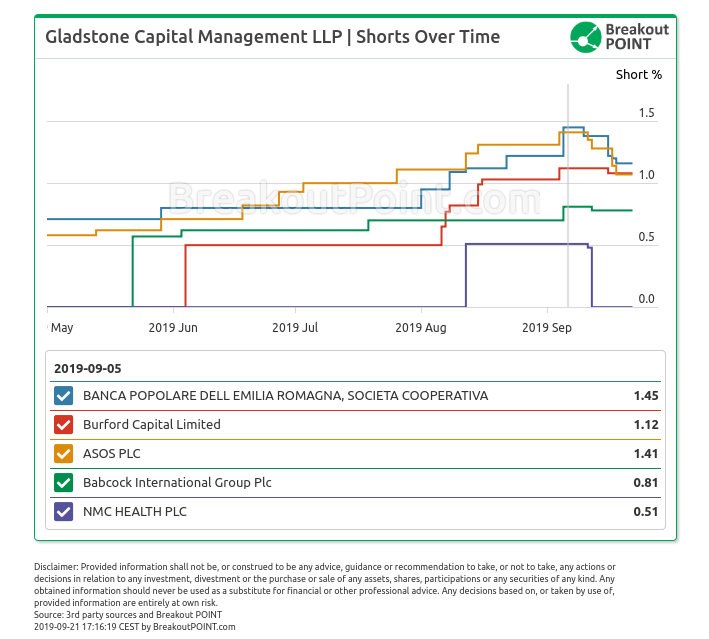 TL; DR: Gladstone Capital has been reducing almost all of their EU big shorts in the past two weeks. This is in strong contrast to previous 3-4 months, during which we, almost exclusively, noted many increases in Gladstone's EU short positions portfolio*

Since September 6, we noted twenty short position reductions and no increases in the big shorts EU portfolio of Gladstone Capital. We rarely observe such rather synchronous activities across a short portolfio of a single hedge fund.

Ten of eleven Gladstone Capital's short positions, in our EU records, have been reduced. The only exception is their 0.72% short in Österreichische Post that has not been changed since 2019-08-01. Three big shorts have been cut below disclosure threshold in September, while eight are still above it. Short portfolio remains rather balanced, both country-wise and sector-wise, with three bets against UK firms, and two each in: EU Banking and EU Machinery, Equipment & Components sector.

Notably, Gladstone Capital is still holding the biggest short in Burford Capital. Burford was in focus of two recent activist short reports by: ShadowFall in July (down about 51% vs prior to the report) and Muddy Waters in August (down about 28% vs prior to the report). Gladstone's short in Burford first appeared in June, long before activist short-sellers reports, and, according to our records, was reduced for the first time on 2019-09-16, after seven consecutive increases.

Interestingly, two well-known European hedge-funds have also been reducing many of their big EU shorts in the past weeks, but to a somewhat lesser extent than Gladstone Capital.