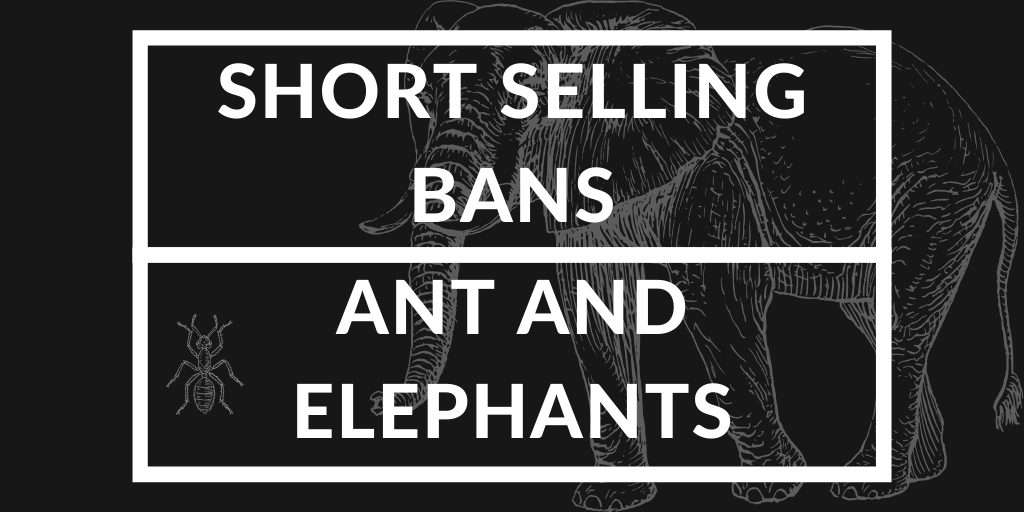 This week, six EU regulators announced country-wide short selling bans in duration from one up to three months.

While Spain, France, Belgium, Austria and Greece announced bans in duration of about one month, Italian regulator, announced that this measure will be valid, unless revoked, for three months.

This is not the first time that such prohibitions are introduced across Europe and we captured a number of short selling bans since 2014. In some instances, they even lasted much longer than three months:

A mere ant and the elephants

What's left to do for those that are/were hedging their risks via short-selling in specific equity, but cannot do that anymore? They are forced to sell their long holdings, or forced to look for shorts - insurance - in other markets.

Back in 2008 SEC halted short selling in financial companies. Chairman of SEC, said, at the end of his tenure, that the biggest mistake of his term was to implement a three-week ban on short-selling bank stocks at the peak of the 2008 financial crisis (ref. CNBC).

Furthermore, academic studies provide evidence that banning short-selling "doesn't work" and a nice overview of several related studies has recently been provided in FT Alphaville. Thus, a valid question remains why the authorities resort to short-selling bans in spite of evidence that it is apparently not really effective.

Finally, to the point of hedging the risks or protecting other positions via short selling and inability to do so now, we would like to note that we rather regularly encounter short-selling disclosures that seemingly represent a part of a broader strategy. Two possible examples would be: