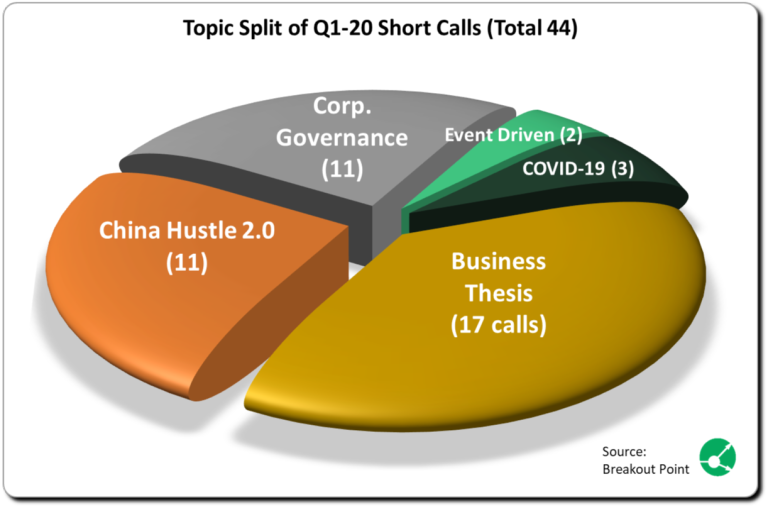 Get 10% off in the first two calendar months with code "RV8Zi3Ev" (limited availability). Join Breakout Point!

In Q1, we have registered and tracked 44 new major short campaigns which is similar to a number of short calls we recorded in Q4-2019. On average, targeted stock dropped 31% following a short call/report, which is a considerably higher drop compared to about -23% YTD performance of S&P 500. Interestingly, just a small fraction of this 31% decline has been available after the first day close, which, according to our records and on average, has been about 4% lower than on the day preceding report.

We classified 17 of these short calls as Business Thesis shorts, and have 11 in each: Corporate Governance and what we call the China Hustle 2.0 group. The most targeted country/region has been US with 20 short reports. However, corresponding US shares had the best relative performance with an average decline of 'only' 15%. Much worse off were European (6 short calls) and Canadian (4 short calls) targets, that on average declined 52% and 55%, respectively. 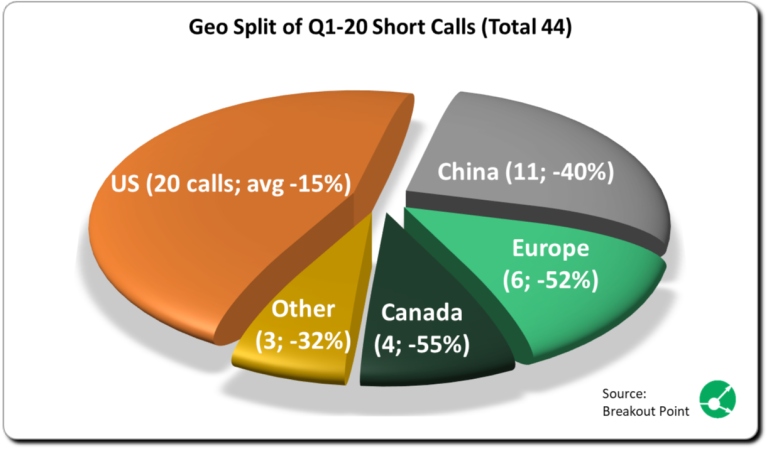 Based on shares performance following release of the report 5 top performing Q1 short calls are: 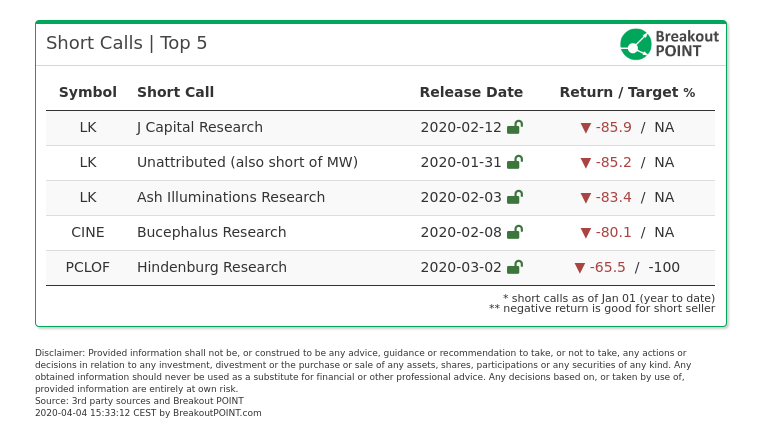 When looking at campaigns strictly published in Q1, one of the most interesting reports for us is certainly Black Mamba’s take on a well-known battery maker. They exposed a seemingly material business flaw for this producer of batteries by creative due diligence. They dismantled earphones of several leading manufacturers only to allegedly find batteries of other producers which countered claims of the company’s management about them being the ‘only game in town’ when it comes to this type of batteries. The shares cratered in the week of the report by 30% and continued to slide further hitting Black Mamba's -50% target. The report got wide coverage by a number of media outlets as the market was seemingly caught blindsided. Following this report, we also detected new short-selling activity by Coltrane, Third Point, Melvin and Scopia in these shares.

Another mention must go to Hindenburg Research and their five out of five record in Q1 2020. According to our records, targeted shares are, on average, trading a whooping 56% lower. They are not only the activist short seller with the most Q1 2020 reports, but are also the only entity appearing multiple times in our list of ten most successful short calls. They also had a more detailed look into the small-cap territory during Q1, specifically with the campaigns targeting NexTech, PharmaCielo and most recently HF Foods Group.

Hindeburg's work was also interesting to us in terms of approach. Parts of it included in-depth due diligence with extensive onsite visits and creative research into subsidiaries. Their Opera campaign from January is also doing well (-45%) and still did not hit their proposed downside. On the other hand, while quickly hitting their upper downside target of -20%, Cineplex shares continued to slide and are down more than 65% vs prior to the report.

Last but certainly not least, would be activist short research related to Luckin Coffee. While the demise of Luckin Coffee did not strictly happen in Q1 as the announcement of 2019 sales being fabricated occurred few days into Q2 (ref. CNBC), we have to mention it.

The campaign against this chain of coffee shops in China was first launched at the end of January by famous Muddy Waters who republished an anonymous report. The second thesis, which corroborated many of the points, was released just a few days after that by a previously unknown short seller, Ash Illuminations. Lastly, it was J Capital Research that scrutinized all the data points in the bull thesis and supported the downside case.

We would end this section by mentioning one tweet, that argues that Luckin Coffee long holdings by several prominent hedge funds is a further evidence that nobody knows anything.

We would not label Ash Illuminations, Muddy Waters and J Capital Research as ‘nobodies’.

ShadowFall, specialist in European equity space, published two public short reports in Q1. With related shares trading about 39% lower, they are among those that marked Q1 in our records. Matthew Earl, managing partner of ShadowFall, had following to share:

Q: What is the one effect of COVID-19 that investors do not appreciate enough? (with focus on short ideas)

A: One factor which has seen some attention of late but we believe on the whole remains underappreciated is that over recent years equity inflows have been almost entirely driven by corporates buying their own stock. Contemporaneous to these buyback flows, corporate indebtedness has risen. With the prospect of less credit and weaker operational cash flows it’s difficult to envisage how equity inflows are sustained at the pace the market has become accustomed to. Meanwhile flows from households have been somewhat negligible, and with rising unemployment and heightened employment concerns, we do not see household flows picking up any slack from corporates.

Q: What new screener for short ideas has ShadowFall implemented in Q1 due to COVID-19?

A: Part of our screening has always incorporated a focus on debt, its composition i.e. the sources of credit, covenant tests and headroom. This will remain a principal focus. One area where we will pay greater scrutiny is share buyback programmes which may have helped to sustain the valuations of Issuers over recent years. As it happens, a share buyback programme played an integral part of our short thesis on Temenos, since we believe it has assisted Temenos in obscuring what we view as an egregious management performance pay scheme. Over recent years, this buyback programme had also gone hand in hand with increased indebtedness. Credit may be less forthcoming to fund such programmes over the near future.

Q: Which (3rd party) recent short report especially draw your attention and why?

Q: What should we expect from ShadowFall in Q2?

A: We focus on the UK and European markets. We have a number of UK names we are currently researching, some of which appear very promising on the short side. We also have some German names on the radar.

Nathan Anderson, founder of Hindenburg Research, that we emphasied above, kindly participated in a Q&A session:

Q: What is the one effect of COVID-19 that investors do not appreciate enough? (with focus on short ideas)

A: I think COVID-19 has increased correlations across the board, so a lot of short ideas have been getting swept along for a ride (up or down) purely on beta. Right now for a short thesis to work I think it really needs to be stronger than pure fundamentals or light red flags. Otherwise it just gets lost in the market volatility.

Q: What new screener for short ideas has Hindenburg implemented in Q1 due to COVID-19?

A: It’s pretty much the same, but now we keep an eye on obvious COVID-19 related promotions. Every sketchy biotech company in the world seems to have stumbled onto a cure or related treatment for COVID-19. There are also a handful of special situations, such as the risk of merger deals falling apart, that can provide asymmetric returns on the short side during periods of market stress like this.

Q: Which (3rd party) recent short report especially draw your attention and why?

A: We haven’t spent much time reviewing other reports as we’ve had quite a busy start to the year. I did see the Peloton girl’s response to the Citron report however and I thought that was perfect.

Q: What should we expect from Hindenburg in Q2?

A: We have a lot of ideas in the pipeline with no particular industry. All U.S. and Canadian-listed companies. Allegations include an undisclosed insider enrichment scheme, flagrantly inflated assets, a company that doesn’t look to actually own its key assets, and a fake revenue scheme. We expect it will be quite a busy Q2.

In times of stress, we believe it could be interesting to revisit short campaigns where the thesis relies on accounting gimmicks. A challenging environment could easily expose the alleged tricks some of the companies are supposedly using.

For example, we would highlight ...