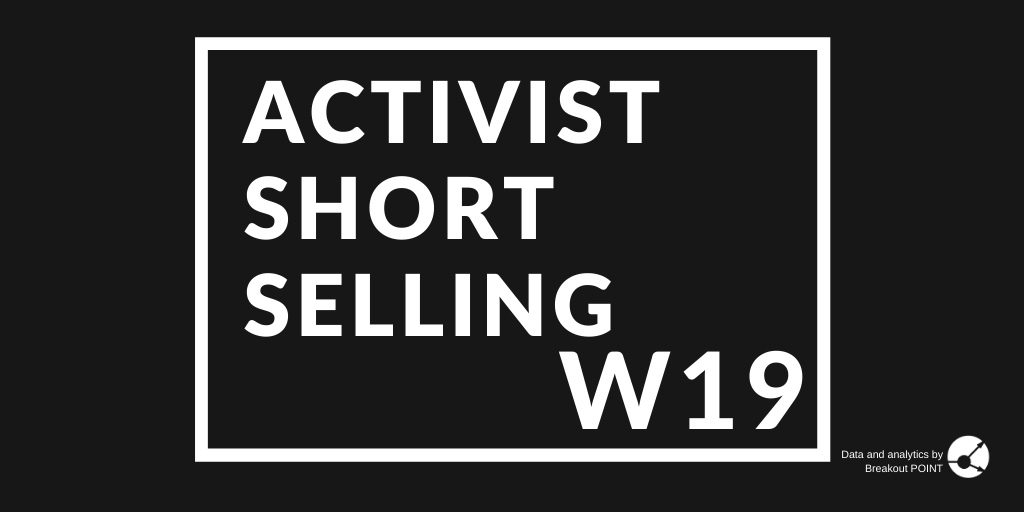 Where is the remaining short sellers' edge? During an hour long, great conversation "MiB: Betting Against Fraud and China", Jim Chanos had this to say about possible alpha generation on the short side:

"...thinking beyond a — what the immediate information is, or more importantly, if the information being presented to you, which is often the case in my world, is intentionally misleading..."

We agree with this. We could add that, in our activist short selling tracking activities, we also encounter on-ground due diligence, which is often an important factor contributing to short sellers' edge. Two recent examples are: (1) unattributed Luckin Coffee (LK) report (LK -88% since) which allegedly included "92 full-time and 1,418 part-time staff on the ground to run surveillance and record store traffic for 981 store-days covering 100% of the operating hours"and (2) field checks by QCM of Akazoo's (SONG) office locations (SONG -54% since, halted).

Muddy Waters told Bloomberg they are short unnamed cruise company, adding that until Covid-19's defeat, they do not think that cruise lines are viable. Scepticism about cruise lines is not new. For example, Jim Chanos is vocal about it., while in our short-selling records, BlackRock Investment Management (UK) maintains the biggest related short with a 1.89% short position in Carnival plc (about $180m short at a market cap of $9.5b). Meanwhile, Hedgeye issued a long report on Norwegian Cruise Line (NCLH) after NCLH raised more than $2b in fresh capital:

About 30 minutes later, @stoolpresidente loaded up on shares.

This week, our Wirecard related feed was filled with comments by well-known short sellers. For example, Chanos and Cohodes combined for twenty related tweets. Also, disclosed short interest is at multi-year highs in our records, and went from 4.39% to 9.99% since the report by KPMG.On top of that, on Friday, Reuters reported that BaFin is investigating Wirecard communication ahead of KPMG's audit publication.

Second report by Culper Research in 2020

This week we have seen a new target of the short-seller who usually researches companies with allegedly dubious management teams. For example, previously Culper targeted ProPetro (PUMP) due to supposed self-dealing of the management. Since then PUMP has been down as much 70% and the CEO resigned.

The new target of Culper is Catasys (CATS), a $450m telehealth company. It seemingly attracted the short-seller for similar reasons as PUMP. Most importantly, Culper alleges the CEO has misrepresented CATS's relationship with several clients.

One example for all can be...

From our database, the five most successful short calls year to date: 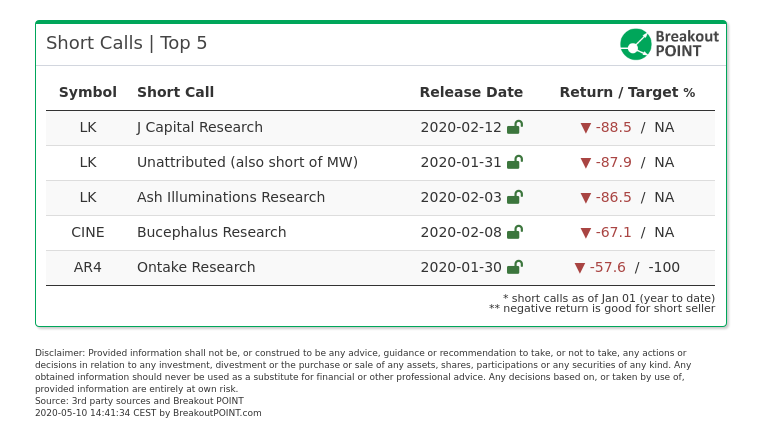