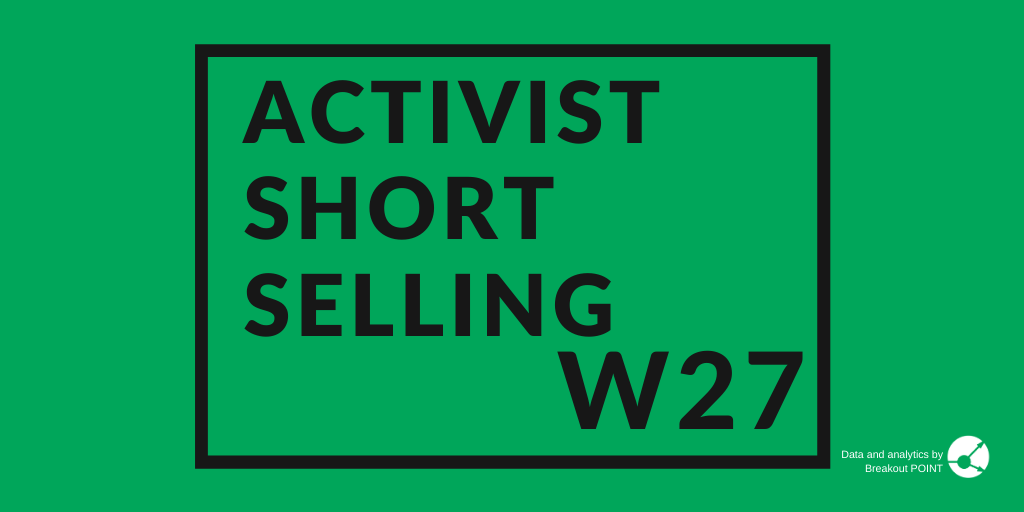 China Hustle 3.0? It seems that SEC is taking their China steps increasingly seriously. They are hosting an interesting webinar on the 9th of July which will feature Carson Block of Muddy Waters and Professor Paul Gillis who runs the China Accounting Blog. We run a related poll, and, have to add that, we would certainly buy a ticket to watch Muddy Waters at BaFin's roundtable:

After the SEC, which regulator is likely to invite @muddywatersre to a roundtable next?

Worst 'short call' in Q2: Since close on 1st of May, day when Elon Musk tweeted "Tesla stock price is too high imo", Tesla shares are up more than 72%. If this has been tracked as a short call in our database, it would have been among three poorest performing Q2 short calls. However, we doubt that this fact worries Mr Musk in the slightest. Actually, CEO of Tesla kicked off Q3 with series of tweets about SEC and short sellers.

Now you see it, now you don't: Citron published, but then pulled a bearish report on Cytodyn. On the day of the report, the shares of this multi-billion company hit a new multi-year high, but then plunged as much as 53% on intraday basis.

This week’s major moves included a sharp downturn for Inovio (INO), Citron’s short. The short-seller was partially vindicated as they did tweet INO would be back down soon after the substantial increase in share price several days ago. We highlighted the tweet last week in our weekly summary.

The other notable mover was CATS which was up more than 20%. CATS is a target of Culper Research who focused on the company due to allegations of questionable corporate governance and business model challenges. The shares jumped in the week most likely due to the company’s PR saying that they have expanded their services to another 13 states. This, however, did not impress Culper who remain sceptical of the stock as per the below tweets.

It is now July 1, and Catasys $CATS remains without a national deal. If the Company is really set to exceed expectations, why was it just forced to amend minimum revenue and EBITDA covenants?https://t.co/9mmnBvgLKfpic.twitter.com/9iyO07sLg6

Correct - $CATS covenants previously required a minimum $90M in 2020 revenues. That is now $90M of *2-quarter annualized* revenues, equating to just $63.5M in 2020 revenues, a massive break from the Company's previous claims. https://t.co/hJC4DC8Bz1pic.twitter.com/ZO7vHQsHqY