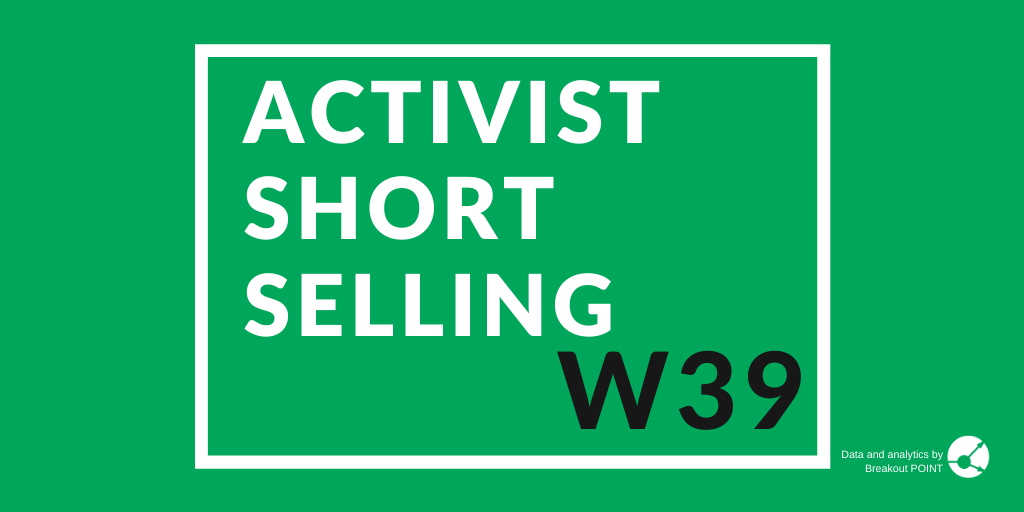 QCM's on ethics of short activism: Global Capital published a great interview with Gabriel Grego of QCM, one of the most sucessful activist short sellers n our records. Grego on regulators:

"To my knowledge the SEC or the FCA start investigating a company only after one of of our colleagues publicly declares a company to be a fraud, or if some newspaper writes a really strong investigative article"

Blue Orca's investment Philosophy: Soren Aandahl of Blue Orca went on an in-depth podcast to discuss their short selling process, investment philosophy and some of the past shorts. Here is a great bit:

On investment philosophy by @blueorcainvest

Zer0s in technicolor: Carson Block of Muddy Waters started Zer0s TV, a videochannel dedicated to short selling. One should expect not only in-depth talks with short selling experts and occasional new short ideas, but also a master class series on short selling.

While several EV-companies targeted by short activist plunged in W39, following developments at Nikola, a number of shares went up.

Bonitas did not see a good week for two of their short targets. First, it was Jinko Solar (JKS) which has jumped over 40% on the basis of a positive earnings report. This purported China Hustle 2.0 stock is supposedly cooking its books, but the market does not seem to put much importance to the claims so far. The shares are up about 60% since the report of Bonitas.

The second disappointment came in Pets at Home Group (PETS) which raised expectations for its Q3 earnings after what they called a strong summer of sales. This online retailer was initially targeted by the short-seller due to allegations of material misrepresentation of financials, especially when it came to PETS’s JV structures. The market brushed away these claims and the shares are up 50% since their report.

Another stock that has seen its share price rise is Boohoo. This fast-fashion chain was targeted by ShadowFall due to allegations of dubious accounting, future liabilities and potentially dangerous competition. The short thesis then morphed into corporate governance allegations as the company was scrutinized for its supply chain in Leicester, United Kingdom due to claims of poor working conditions.

The allegations for now seemed to have been rejected by the market as the company released its third-party internal investigation. While the investigation acknowledges the conditions were not proper, they seem to absolve the company of at least some amount of responsibility. Thus, the shares have moved more than 10% up on this news and are now approximately back at where they were before ShadowFall released its report.

While it might seem parts of the newer claims are invalidated, the original claims of ShadowFall could still be outstanding.

This week we have seen Carson Block and its firm target NANO-X Imaging (NNOX), $1.3bn company focused on new X-Ray solution. This was the second report in just two weeks as Citron has released their allegations just a couple of days before Muddy Waters.

Both reports have similarities. The two short-sellers allege NNOX’s product is dubious and might not work. They also go onto question the customer base of the company which supposedly pledged to buy over $100m worth of the product. While Citron identified similar claims, it was Muddy Waters who deliver a more in-depth report and evidence that the company has allegedly manipulated the showcase of the product.

Muddy Waters did not hesitate to draw a parallel to Nikola in the very first sentence:

"We are short NNOX because we think it is a much bigger piece of garbage than Nikola will ever be."

Most importantly, the report dissects a video showcasing the product and its X-ray images. Muddy believes it is obvious the company used....