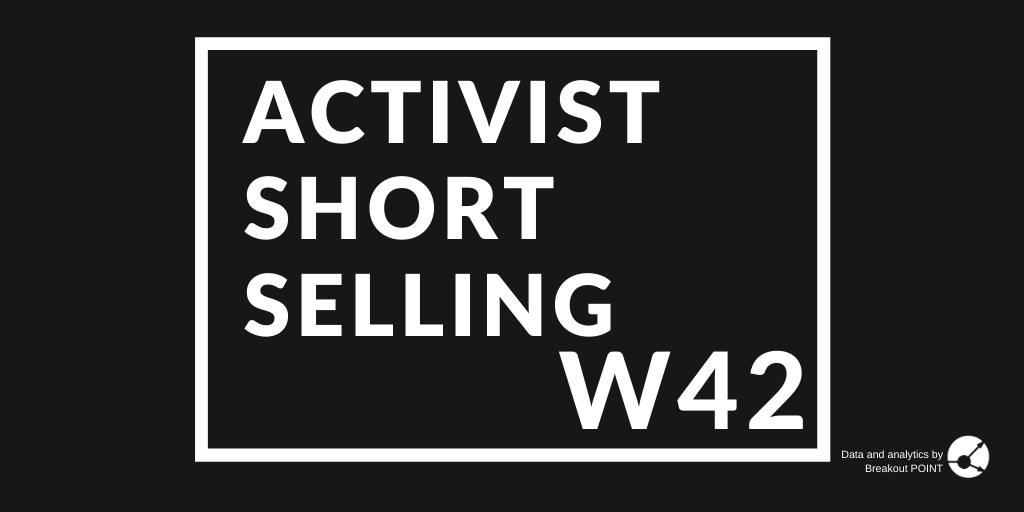 Big Short Big Delay: Rare fine for a delayed short disclosure has been announced this week by UK financial regulatory body. The corresponding short  in Premier Oil was as big as 16.85%, and was a part of a more complex strategy that involved company's debt. FCA fined Asia Research and Capital Management Ltd (ARCM) £873,118 for breaches of short selling disclosure rules. We occasionally note that short positions are disclosed with a delay, but in terms of the delay's extent and percentage of short positions, this has been a rather unique event in our records.

GSX and Short Sellers: No other company has been a subject of more short selling reportsthis year than GSX Techedu. WSJ had a look at GSX:

One of the most underreported market anomalies this year is the short of $GSX. We spoke to a dozen inventors on both sides of the trades and tried to decipher the stock's gravity-defying performance. https://t.co/VSAoHX2bKi via @WSJ@xieyuxy

Four New Short Reports on Oct 22: Four new short focused ideas are expected on Thursday at the Contrarian Conference we co-organise. The conference will feature the following well-known presenters:

This week we have seen two of previous Hindenburg targets move in opposite directions.

First, it was Workhorse (WKHS), an EV company slide by about 165 in the past few days. This is because of news which seemed to have supported claims of Fuzzy Panda, a short-seller who targeted WKHS last week. Roth Capital downgraded the stock on increased uncertainty that the company will be able to win the all-important USPS deal.

nice to see someone on the sell-side started reading our report over the weekend https://t.co/8JP52MydJH

Moreover, Fuzzy tweeted they are receiving new information which will be showcased in an update report soon.

Hindenburg targeted the company in the summer and alleged similar claims to Fuzzy Panda. So far the stock has been rather resilient.

The second stock we want to mention is NexTech (NEXCF), a target of the short-seller from early February of this year. Hindenburg targeted them due to alleged promotional behaviour by the insiders. This supposedly obfuscated the fundamentals of the business. Initially, the short-seller saw success as the company scrambled to respond. However, it now seems the shares have caught a second chance and are up over 270% since Hindenburg’s call.

What changed? According to some, not much. Allegedly, the company continued to publish promising press releases, but revenue has still stayed minuscule compared to the market cap of over $400m now. They were able to raise about $12m in cash from investors which gives them breathing space, but some of the original claims might still well be true.

This week we have seen Hindenburg targeting Loop Industries (LOOP), a $318m Canadian-based tech company, due to allegations of an inefficient product based on the hype created by the insiders. This is the first new report of Hindenburg after their impactful report on Nikola Inc.

Most importantly, the report believes LOOP’s revolutionary way to recycle plastics does not work. The company...