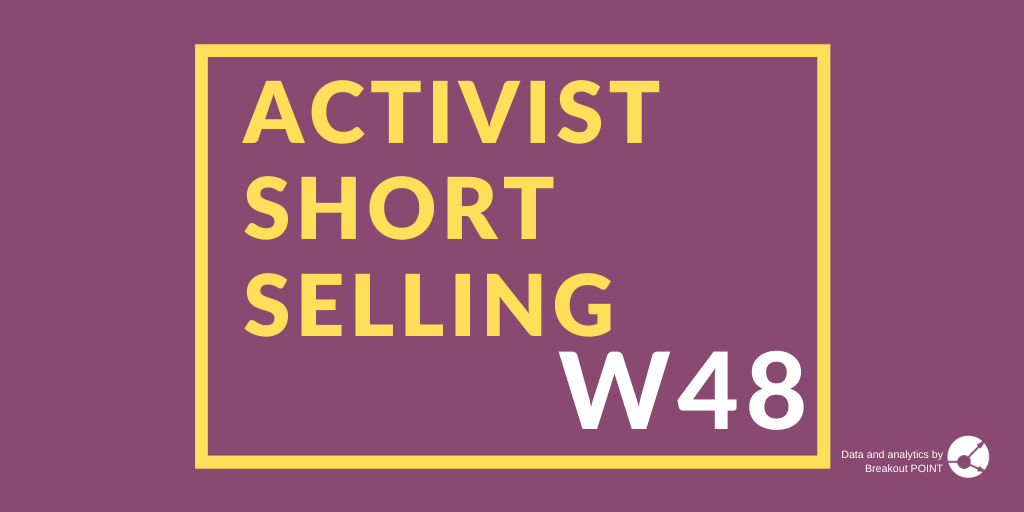 EY in Spotlight: New developments on auditing aspects of Wirecard, came out this week. FT reported that the German audit watchdog reported EY to prosecutors over Wirecard audit, and said that the auditor may have acted criminally.

The Way of a Bubble: EV shares, especially Chinese EV shares, alongside Palantir have been the most persistent and pronounced trend in our retail popularity tracker since the US elections. Nate Anderson of Hindenburg Research had to this to say:

I think about 100 people have emailed saying to look at $NIO$XPEV and $LI.

So far the case seems to be overvaluation and jurisdiction. Not inclined to disagree on either point but such is the way of a bubble.

This week we note a significant win for JCapital Research regarding its short campaign aimed at Northern Dynasty Minerals (NAK), a $177m mining company. The short-seller targeted the company due to the claims that NAK’s main asset is unlikely to be approved and go into production anytime soon. These claims turned out to be spot-on as the company was refused a permit for the mine as per below.

So, we told you September 9, $NAK's Pebble was never going to get approval. https://t.co/fU4iSYAgC7

The stock cratered about 50% on the day and some are seeing further downside as the company does not have many assets left. The stock is down 59% since JCap’s report which did not include a specific downside target.

On the other side of the tracks, we noted two stocks which went against Hinderburg Resesarch. Ideanomics (IDEX), which the short-seller originally targeted due to classic China allegations, is up over 75% this week alone after the company notified the market they own a stake in an EV company. We have covered this in our daily Retail Investors Popularity analysis. The reason for the jump in the price is seemingly the ongoing excitement about the EV stocks in general.

The second stock that went up is Pharmacielo LTD (PCLOF), a cannabis-related stock. Hindenburg targeted the company due to allegations of fake production facilities and dubious related-party arrangements. Recently, the shares surged 74% likely due to a similar reason as IDEX. Cannabis plays saw a resurgence in popularity as several US states legalized or otherwise relaxed their cannabis policy during the elections.

Lastly, we would also highlight the return of Canaan (CAN). The bitcoin mining company saw a significant rebound this week which pushed the shares up by about 50%. Most recently, it was White Diamond who targeted CAN due to allegations of underlying unprofitability of the whole business. Again, the shares are now seemingly surging due to the bitcoin price staging a comeback. Shareholders might now be hoping CAN will eventually print a profit. It should be noted that Aurelius Value focused on the company before White Diamond and found many instances of red flags tied to corporate governance.

Marc Cohodes and Gabriel Grego were able to mark a first small win in their campaign against this medical device company. Grego, of Quintessential Capital Management, targeted the stock due to due to allegations of PEN's flagship product being life-threatening. Specifically, the report talked about the risk of death when exposed to PEN’s catheter. This risk has been corroborated now by a study showcasing similar risks as QCM noted.

This study that came out yesterday happens to be a very big deal and is terrible for $PEN ⁦@QCMFunds⁩ ⁦@natbaker⁩ #recallthedeadlyproducthttps://t.co/psDXNJM2yy

Moreover, the market seemingly started to notice the risk that PEN’s market share could also be under threat as per below...