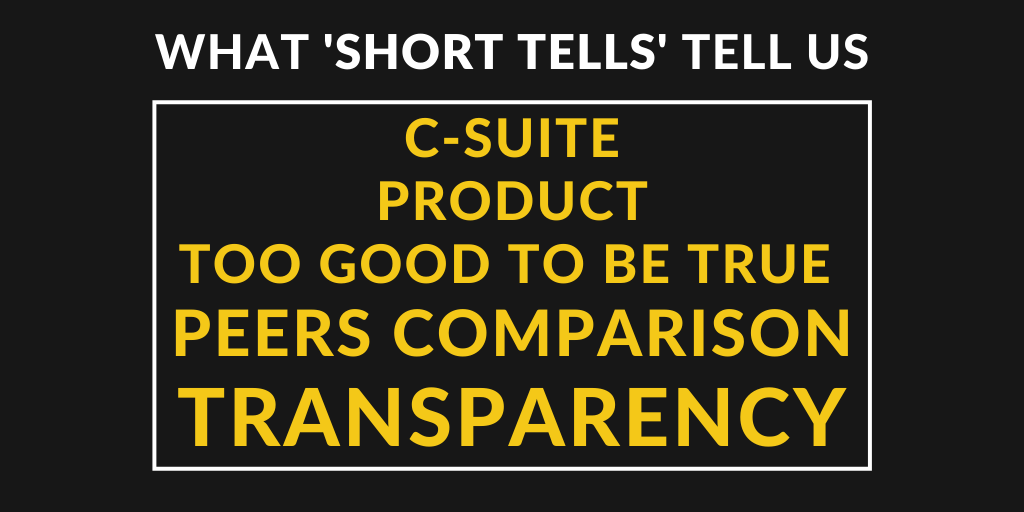 Who would have thought that short-sellers might have one day a dedicated TV station where they are not going to be bashed by the sell-side, twitteratis, CEOs, bagholders or CNBC. Well, this day came with the launch of aptly named zer0es.tv which is run by Carson Block of Muddy Waters.

One of the segments we are closely paying attention to is the series called ‘Short Tells’ or videos of short-sellers talking about what are the usual tell-tale signs that something might be off in any given company. Admittedly, these ‘Short Tells’ have been telling us a lot in the past weeks. Here is what we got so far.

Peers Comparison as a Tell

The first video features Stephen Clapham of Behind Balance Sheet who shares one of his key steps when analysing companies. This specialist in investment research and analyst training focuses on peer comparisons during which he tries to understand how the company is doing compared to its competitors. Margins is one area he pays close attention to when doing so.

This is where Stephen talked about his past track record and mentioned Patisserie Valerie which eventually went into administration. Prior to this, the company was reporting margins higher than Starbucks which simply did not make sense to Stephen given different product offering and other factors. Inventory ratios were also apparently off when Stephen compared the business to Paul, another chain of patisseries.

This type of short tell is often prominent in China Hustle 2.0 campaigns on our platform. Many activist short-sellers have in the past raised questions about the margin profiles of several Chinese-based businesses.

'Too Good To Be True' Story as a Tell

After an accounting tell we saw Freddy Brick of Muddy Waters Research team talk about Nano-X Imaging (NNOX) and why this is apparently a great example of ‘too good to be true’ tell. This recent MedTech IPO landed on Muddy’s radar due to several red flags pointing to such tell.

First, the company claims to solve a complex problem with a seemingly simple solution at a cutthroat price, a remarkable claim on its own. Second, according to Freddy, when the CEO was asked a simple question about how the product works, he veered into a discussion about Thomas Edison and light bulbs. NNOX is a medical imaging company. Third, NNOX’s compensation of several insiders seemed to have also alluded to ‘too good to be true’. One person connected with the stock allegedly got more than one million options. This created immense profits for this individual which is apparenty not even listed on the company’s website.

The verdict for NNOX is still out there and the stock, after initally dropping, is trading higher than before the report. Muddy believes it could eventually be featured on zer0s.tv as a case study, but the market so far is holding up the stock. Whatever the further path for NNOX will be, the short tells were probably already there.

Past Track Record of C-Suite as a Tell

Roddy Boyd of the Foundation for Financial Journalism also chimed in with his own favourite short tell which is mainly based around corporate governance and experience of the management. He recounts how the former CEO of Insys struck him as potentially wildly inexperienced to run such a business. He notes how former Chesapeake’s CEO supported his private art and maps exhibit through the company. He mentions how reading footnotes in finanicial filings is important and recounts how Countrywide Financial, the poster child for subprime lending, tried to convince the market its portfolio of subprime mortgages is just 5% of its business. Finally, he does not forget to mention power of watching for strange lawsuits against a company and talks about Valeant which was sued by its gardener for not paying him the salary.

In all of these cases, such dubious situations did not occur in a vacuum. Thus, it is better to be vigilant about what the people behind the company are actually doing and where they come from. As Roddy Boyd put it: "Who is running the company and what is their real CV?"

Lack of Transparency as a Tell

Anne Stevenson-Yang of J Capital Research also shared her favourite factor to investigate when analysing companies. She focuses on anomalies and lack of transparency. She notes one experience of visiting an address in China where a company was supposed to have its offices. In reality, there was no one to be found there.

Another stock she talked about was a large Chinese real estate company. There she notes various dubious behaviour such as paying suppliers with apartments, ghost towns without any real occupancy or using apartments as bonds.

She finished off with some general tell signs in Chinese companies such as fake margins and fake assets being used by the insiders to enrich themselves.

One does not have to look too far back into J Capital’s activist campaigns activity to spot a similar-looking company. Among their, so far, seven new 2020 reports, a number of targets seems to have most of the signs Anne mentioned.

Product as a Tell

So far, the last short-seller presenting his favourite tell-tale sign was Adam Gefvert of White Diamond Research (WDR). Adam mentioned he usually looks into the negatives of the product, a step that is not usually done by the insiders of the company in public.

He notes an example of Wrap Technologies a niche company which produced a new non-lethal way of supposedly incapacitating a suspect. The management started to aggressively tout the product saying it is now being tested by the LAPD and has a strong potential. According to the short-seller, what they did not say to the investors is that during that LAPD test the BolaWrap was used only nine times and only six of these were described as successful. White Diamond thinks it is actually impractical in the vast majority of situations.

The stock is down 48% since WDR targeted it, but WDR put a price target even lower envisioning up to 75% of downside.