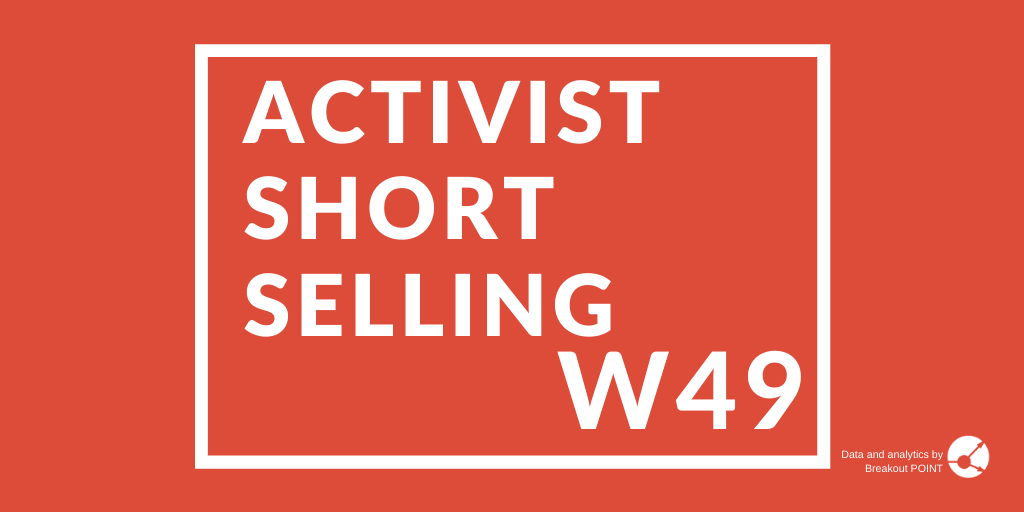 China Hustle Vindication: Fitting into "How it started; How it's going" meme are the latest development with Chinese U.S. listed stocks. It all began with the developments depicted in the documentary film "The China Hustle". While this WSJ article well describes how it's going:

Yes, it's really J Cap, and we are really long. $TPIChttps://t.co/LtOVDtLcERpic.twitter.com/CYJaORue4a

Citron vs Retail Investors: Citron Research has been recently negatively and with certian success flagging some of the most popular stocks among retail investors. These are: Palantir Technologies (PLTR), Nio Inc (NIO), Electrameccanica Vehicles (SOLO and Blink Charging (BLNK). All were very highly ranked on our top retail popularity list: 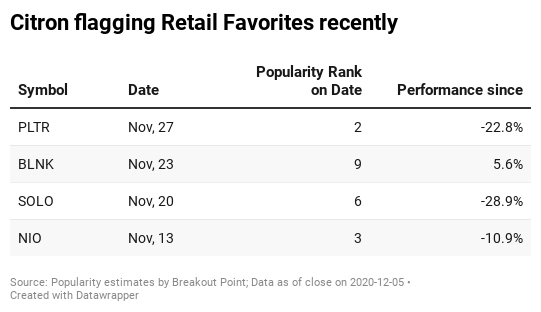 This week Hindenburg scored a quick victory in its campaign against Kandi (KNDI), a Chinese-based EV company. The short-seller alleged improper related-party transactions which inflate a major part of the revenue. They also pointed out the corporate track record of Kandi which is tainted with many similar scandals in the past. We have seen several short-sellers target this company throughout the years.

Once Hindenburg’s report was out, the stock sunk and has not been able to regain much of its valuation before the campaign. It should be said that the share price trend was already negative when Hindenburg published as the market was likely harvesting gains from pumping KNDI two weeks ago.

This week also brought an interesting dichotomy between Bitcoin mining stocks previously targeted by short-sellers. RIOT, which was this year targeted by White Diamond Research, has seen positive share price action on the back of increasing Bitcoin price. WDR did mention that in order for RIOT's business model to start making sense the price would have to average $19,000. This is now possible, but it will be interesting to see whether the price will stabilize in this range.

On the other hand, CAN, which was also targeted by WDR on top of Aurelius Value this year, sunk about 40%. It seems not all of the bitcoin-related stocks are able to exploit the hype to the fullest. It should be interesting to follow the whole space.

Lastly, we also note that Inovio (INO), a COVID19 vaccine hopeful, has seen its share price rebound by about 20% since W47. This is on the back of the news that the company has added a new manufacturing partner for the potential vaccine. The Phase 2/3 study is still ongoing. Both Muddy Research and Citron have previously warned about the prospects of the vaccine. Specifically, they highlighted the abysmal track record of INO in delivering a marketable product.

Grego and Cohodes looking at PEN

The news about the developments in the campaign of QCM against Penumbra (PEN) might become a weekly staple of our review given the activity of both Gabriel Grego and Marc Cohodes, who recently joined...