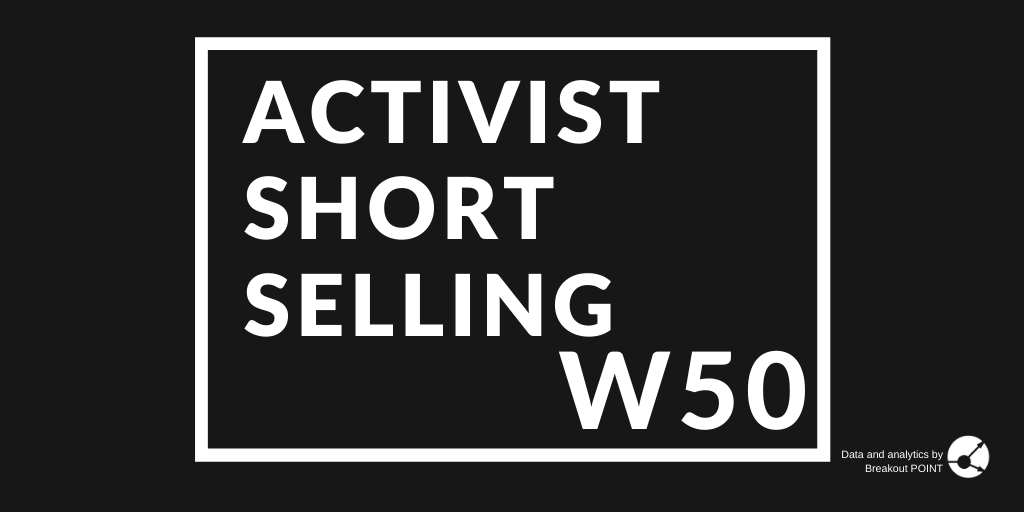 Wirecard trades: The latest revelation in Wirecard case is that the head of Germany's audit watchdog bought the Wirecard shares on the day of KPMG report, and is now facing a probe.

Retail Investors love IPOs: This week's prominent IPOs got a lot of attention from the retail investors. According to our retail popularity estimates, Airbnb has been the most popular retail stock on Thursday, while DoorDash and C3.ai were occupying two top spots on Wednesday. As elaborated below, we already noted a critical report on DashDoor, published by Probes Reporter.

The most successful campaign this week was aimed at Solutions 30, a tech services company listed in France. The shares have dropped about 25% since the anonymous report was circulated within the investment community. Initially, the report was not available to the public, but a day after the company’s response, one media outlet shared the over 100-page report outlining serious allegations.

The company provided a detailed report trying to counter the allegations.

Muddy Waters holds a 0.65% short position as per our database on European big shorts. They also sent a letter to the company asking further questions regarding its response.

MW has written an open letter to Gianbeppi Fortis of #Solutions30 $S30.FP asking questions about the company's response to the recent Anonymous Report https://t.co/FMVR7OVGp0

On the other side of the tracks (more painful for shorts), we saw CytoDyn (CYDY) rise sharply by about 40%. This biotech which was targeted first by Culper and then by Citron (who deleted their report since then) likely saw positive action due to apparent excitement of a possible FDA approval for one of the company’s products.

While the initial allegations of both short-sellers might not be as current as before, some of the claims still raise questions about the overall corporate governance of the company and its track record. According to Culper, the CEO has a questionable background and used to sell dreamcatchers. Allegedly, he declared personal bankruptcy twice.

Penumbra and a fake researcher?

The duo, Grego and Cohodes, are as per their own words ‘not going anywhere’ in the case of this medical device company. The initial allegations were mostly focused on PEN’s product and its harmful track record. These have now been broadened to include various red flags concerning corporate governance.

Most importantly, this week the short-sellers have publicized an update to their report which alleged the company has been associated with a fake persona who was named as an author of many academic papers about PEN’s products. As per usual, there was also a Periscope event which explained everything in more depth.

According to QCM and the lawyers they consulted, this could constitute a case of securities fraud. The stock got pressured and is down about 12% so far this week. The company was finally forced to acknowledge the short-selling allegations.

First, on Monday, they released a short 8-K saying that QCM got the revenue share wrong for the key product in question. Then on Tuesday, they had to respond to the allegations of fake persona as per below.

It needs to be said that the fake persona has been in the meantime apparently deleted. QCM also noted the below.

*** We just received what appears definitive proof that the Antik Bose fraud has been designed and perpetrated by the very top echelons of the company. We are making final checks and confirmation before we make this public. ***

Thus, it is likely the flurry of news is not going to end soon.

Early this week we have noted several developments in campaigns aimed at the China Hustle 2.0 shorts, or campaigns alleging fraudulent intent of insiders in many Chinese-based US-listed stocks.

First, it was Hindenburg who reacted to the response of Kandi Tech (KNDI), an EV-focused company. The short-seller initially alleged fake revenues through undisclosed related-party transactions. It seems that the short thesis remained unchanged as the short-seller noted the company essentially confirmed...