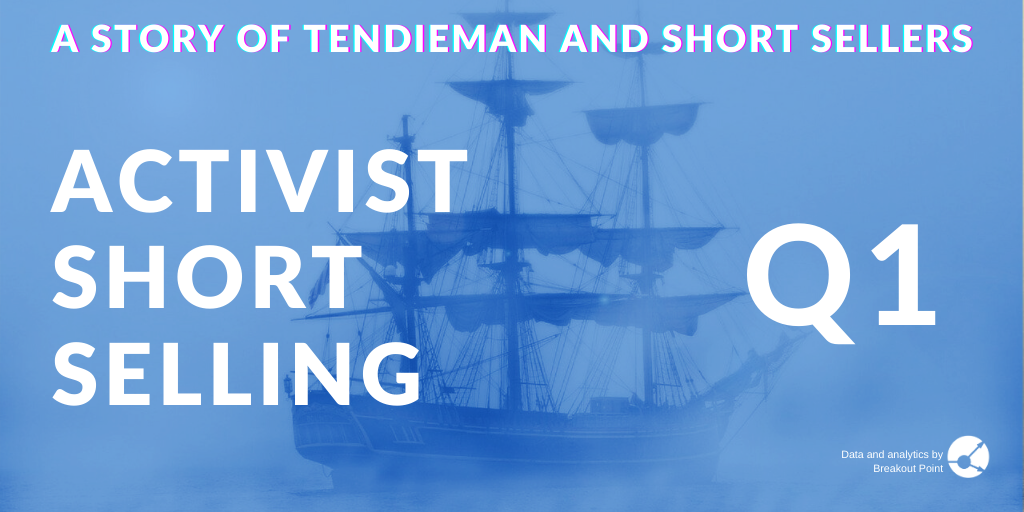 On average, the targeted stocks are trading down an astonishing 19% at the end of Q1. Such a level of success might come as a big surprise, especially considering the strong long focus on positions of short sellers in Q1, as well as the weak results of activist short sellers in 2020.

Four entitities had more than two major reports. Hindenburg Research had four new critical reports with four stocks in focus trading about 21% lower since the reports:

The country most frequently targeted was the U.S., with 33 short reports, representing about 73% of all reports. This is a much higher percentage than what we recorded througout 2020, when about 55% of short reports focused on U.S. companies. Behind the U.S. are China and Australia. Each had four new major short calls. Europe is noticeably underrepresented, with only one major new short campaign. In terms of stock price performance, the activist short selling of Chinese companies has been most successful with stocks trading 31% lower on average. This is especially due to great  success of Wolfpack Research and Muddy Waters. Following three reports by these two entitites, three U.S.-listed Chinese companies are down 51%. Various activists also achieved a lot of success in the U.S,, as short campaings delivered an average return of about 21%. 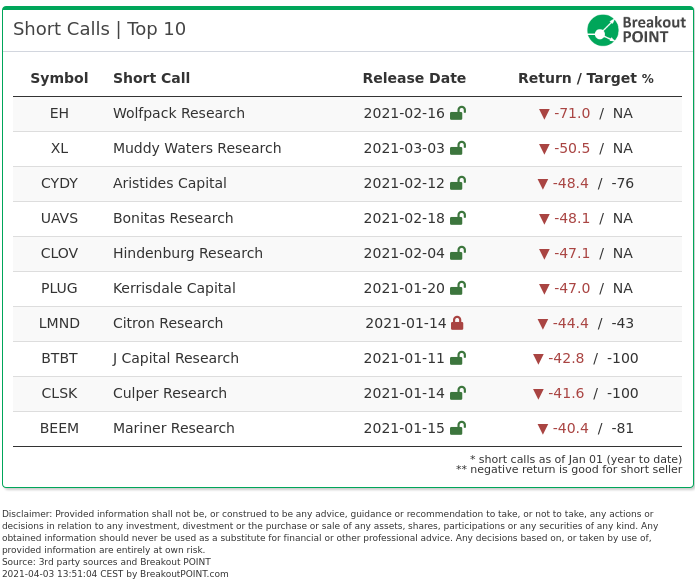 In terms of shares decline following a report, the most successful campaign was by Wolfpack Research who targeted Ehang (EH) a Chinese-based aerial vehicle business. The activist has claimed strong allegations of fraudulent behaviour.

Most importantly, the initial report believed the company has exaggerated its connection with a key customer. Wolfpack found that the customer has a dubious presence in China and allegedly did not recommend buying EH's products. According to Wolfpack, the customer was also involved with EH's pre-IPO financing which allegedly gave them the motivation to pretend to be larger than they are.

While the report has started somewhat of a battle between the company and the short-sellers, the stock has failed to rebound and is now being held down by the allegations. Wolfpack's Q1 success has not end at EH. Skillz Platform (SKLZ), subject of their second Q1 report, is about 32% down.

The second biggest impact was by Muddy Waters that targeted XL Fleet, Chinese EV company, due to allegations of misleading statements and a dubious business model.

Wolfpack is backed by Muddy Waters, so it is reasonable to assume that Muddy Waters has benefited well from the big declines in not only XL, but also in EH and SKLZ. Or, if we borrow from the folklore of retail investors, it seems that the Tendieman rewarded Muddy Waters with many tendies in Q1.

The third most impactful campaign was by Aristides Capital which released a series of detailed tweets against the infamous CytoDyn (CYDY), biotech focusing on several treatments including COVID19. Aristides targeted this $3.73bn biotech due to allegations of product inefficiency.

Most importantly, the stream of tweets was aimed at the upcoming results of CYDY's key asset which is being pitched as a weapon against COVID19. The company has been praising the potential, while the past performance of the treatment is supposedly dubious. According to the short seller, before COVID19 it was pitched as a treatment against HIV without much success, and in total it has 22-year history without being a commercial success.

The campaign saw a significant win in early March as the company released a set of data that did not seem to showcase meaningful improvement in patients conditions which confirmed part of the thesis. Despite this first win, the stock has started to slowly creep up again after a flurry of new PRs with other hopeful developments. It is also noteworthy that, a few weeks before Aristides, a newcomer short activist Saique Research published a report on CYDY.

In Top 4 best performing Q1 activist shorts is also Bonitas who targeted Ageagle Aerial Systems Inc (UAVS), a drone business due to allegations of being a pump and dump scheme.

Most importantly, the initial report believed the company has misled investors as it has allowed a rumor to be released about a potential deal with Amazon. However, according to Bonitas, at the end of last year, the e-commerce giant refuted this and said that they do not work with UAVS in any capacity. Before this happened the stock went from being a penny stock to $16 per share, while according to the short seller, at the same time insiders have offloaded over 90% of their position.

The report saw an immediate sell-off and to a certain extent continued downtrend ever since.

On the other side of the tracks, there were only a few campaigns that have seen the share price go strongly against the short-seller. According to our records, a the end of Q1, only three of 45 major short reports are facing hare price increases of 10% or more.

Turn of the tide?

January of this quarter seemed to have pointed to a continued pain for many of the short-sellers as many of the battleground stocks raced higher. However, in the past few weeks, we have seen somewhat of deflation of some of the valuations, especially in the tech and EV space.

Some popular stocks such as Workhorse (WKHS) have blown up in one day. The EV stock unsurprisingly did not win any part of the USPS deal as was predicted by Fuzzy Panda. Other stocks are now on a slow descent from the highs in January as can be seen below.

On the other hand, some of the stocks have escaped pretty much any sort of downtrend. Just look at Carvana (CVNA), a used car business that has been targeted by three activist short-sellers in the past. The stock is racing to new highs and is up over 700% since the last activist report.

Been a while. Trying to write every (other) weekend. Check it out!

"Everything I Love About Carvana" $CVNAhttps://t.co/DLhkFis218

It will be interesting to see whether the downtrend will last into Q2. We will already know more in the next few weeks as April is likely to be full of potential catalysts for many of the campaigns. One example for all could be GSX Techedu (GSX). This online education company will have to provide audited financials as a part of their annual report. A number of activists do not believe this will happen and see the stock being ultimately delisted from the US exchanges.

This headline has been featured many times in media and among the activist short-selling community this quarter. The reason for this was clear as the GameStop (GME) saga and the 'short-squeeze' narrative proliferated in the past months. Retailers have lambasted short-sellers and accused them of blatant market manipulation. As is usual, a complex topic was boiled down to few simplified tweet-worthy phrases and the rest is history.

In the centre of the storm was Citron Research. Citron came out against GME before the January price action and retailers quickly crafted a narrative of the evil Citron trying to manipulate the market. This has led to a wave of hatred and online vitriol aimed against the veteran. So much so that the founder of Citron had to come out and say that Citron will stop publishing its short research publicly after he mentioned some have targeted his family with the hate.

Citron Research discontinues short selling research After 20 years of publishing Citron will no longer publish “short reports”. We will focus on giving long side multibagger opportunities for individual investorshttps://t.co/gP9HXzo7Nf

This tentative departure is certainly notable as Citron Research has played a pivotal role in the activist short-selling space as the outlet was one of the first short-sellers who came out publicly with their activist thesis. The role of Citron is also important because of the lawsuits launched against Citron which ultimately failed to gain considerable traction. These legal wins have set strong precedents for the current activists hunting for the next fraud, failure or fad.

Short sellers seemed to be the most hated investor group in Q1 and were often portrayed as a homogeneous group that rigged the process against retail investors. Some came out and offered an in-depth perspective on the different flavors of short selling and supported the retail fight against the 'suits'. Namely, it was famous short-seller Mr. Cohodes who started to actively tweet dislike against Melvin and others who used excessive amounts of leverage. He also went on Portnoy's show to explain his view of the situation.

Here is @stoolpresidente Podcast with me.. Lets see what happens next https://t.co/nFKOu3yiDL

So far we have not seen any decisive action coming out of the hearings about the whole GME story.

Other activists were a bit warier with their reports during the time of the backlash. For example, Hindenburg released a critical report about Clover Health (CLOV) only to say that at the time of the release they were not shorting the stock. Since then the stock is down 47% and parts of the thesis seemed to have been publicly confirmed.

We should note that despite the public backlash against short-selling, Citron, Melvin and others, we have registered several newcomer activists who published their research publicly for the first time. Some activists were already public figures before such as logphase Research who came out with their first campaign against Ocugen (OCGN). Some came out anonymously such as the impactful Jehoshaphat Research who targeted Amdocs (DOX) due to allegations of fraudulent accounting.

Thus whatever the market situation it is clear that activist short-sellers are unlikely to give up the fight. This might not be surprising as, in the end, the words of founder of Kynikos Associates seem to continue being applicable to the state of the market:

‘We are in the golden age of fraud’