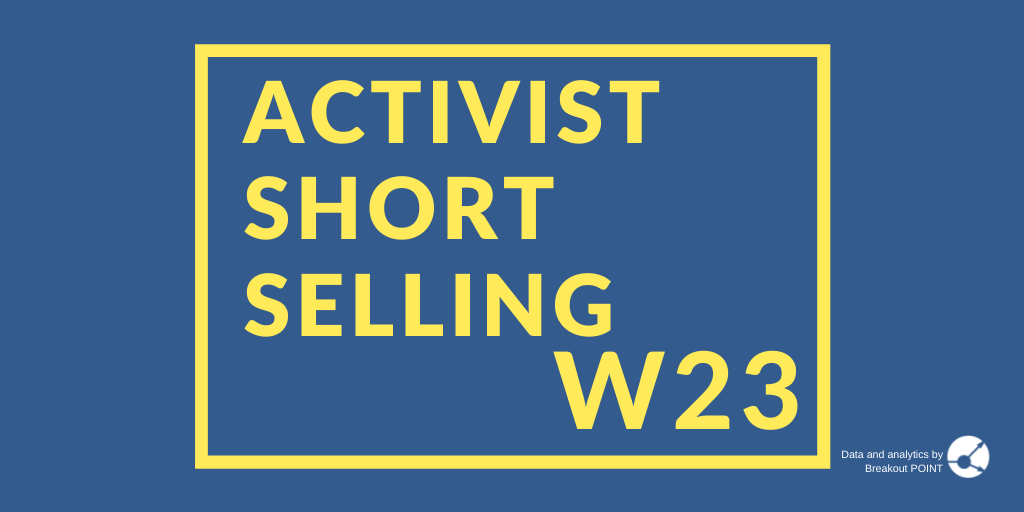 The last time the median S&P 500 short interest was this low was at the absolute peak of the dotcom bubble. GS chart: pic.twitter.com/MPAHL6WCog

This week’s we saw several stocks that moved in the right direction for the short-sellers. The biggest mover was Ocugen (OCGN), which is down about 38% this week. The stock was initially targeted by logphase Research due to allegations of unlikely drug approval.

Most importantly, the report believed the company is unlikely to see its vaccine, which is being co-developed with Indian companies approved in the US due to several complicating factors such as legal and political. The company will also need to dilute shareholders to get access to the cash needed to move forward with the approval.

The thesis got a new boost as the company announced it would likely need another trial to get the vaccine available in the US. The company was expected to try and get Emergency Use Approval from the FDA, but this is now not going to happen, and thus the road to the US market now seems much more distant.

Since the initial report, the shares are down about 21%. The short-seller saw up to 75% downside.

On a volatile side of the tracks, we have seen some movements against and then in favor of the short-sellers. Most notably, the market has pushed up, but then down Mountain Valley MD Holdings (MVMD). The stock was as high as 80%. This is due to news that MVMD's main COVID19 asset might be facing a favourable environment due to developments connected to Ivermectin, as per the below tweet.

Real science and political barriers being hammered down relating to #ivermectin only a matter of time $MVMD$MVMDFhttps://t.co/Vmw1e6eW2f

MVMD was initially targeted by Night Market Research due to allegations of rampant stock promotion and dubious business model.

Most importantly, the report believed the company's effort in developing a drug platform is nothing but a promotion to pump the share price. None of the insiders have any relevant work experience. Night Market found no evidence of any medical background when it comes to MVMD's lead scientist. The company's only relevant asset is an 8-year old patent.

While the news seems to go against the thesis, the company's stock price failed to gain much traction after its initial increase. Thus it might be interesting to continue to track the situation.

While most EV stocks were able to rebound slightly after the strong sell-offs a couple of months ago, some were unable to enjoy the trend as much. This is especially the case with Lordstown Motors (RIDE). The stock was initially targeted by Hindenburg, who targeted the company due to allegations of inflated business opportunity.

Most importantly, the report believed the company had touted many contracts which are dubious or are allegedly not finalized. Some of the largest customers of RIDE are based out of dubious address and do not have much history of being in business, much less having the capacity to order tens of thousands of EV vehicles. Others have told Hindenburg that they just considered buying from RIDE, and they did not commit to anything.

These claims were then partially validated as the company failed to generate news against the thesis. Now, it seems the thesis is looking even stronger. This is mainly because of the below tweets which questions RIDE's ability to start commercial production.

KPMG adds a "Going Concern Notice" for $RIDE...now we know why Lordstown's filings were late.

Lordstown Motors made periodic disclosures regarding pre-orders which were, in certain respects, inaccurate.

CEO and CFO resigned from the company.

It seems that this message has spooked other EV names in the space as well. Thus it will be interesting to monitor the space going forward. There are still many stocks that have been targeted by activists, such as Workhorse (WKHS) by the above Fuzzy Panda or Quantumscape (QS) by Scorpion Capital.

A zero right out of the IPO gates?

Large parts of the short-selling community were eagerly awaiting the new short report by The Boatman Capital Research. The short-seller ended up targeting a thermal coal company, Thungela, which debuted on the South African stock market on Monday. Boatman targeted this soon to be public thermal coal company due to allegations of understated liabilities.

Most importantly, the report believes the company severely...