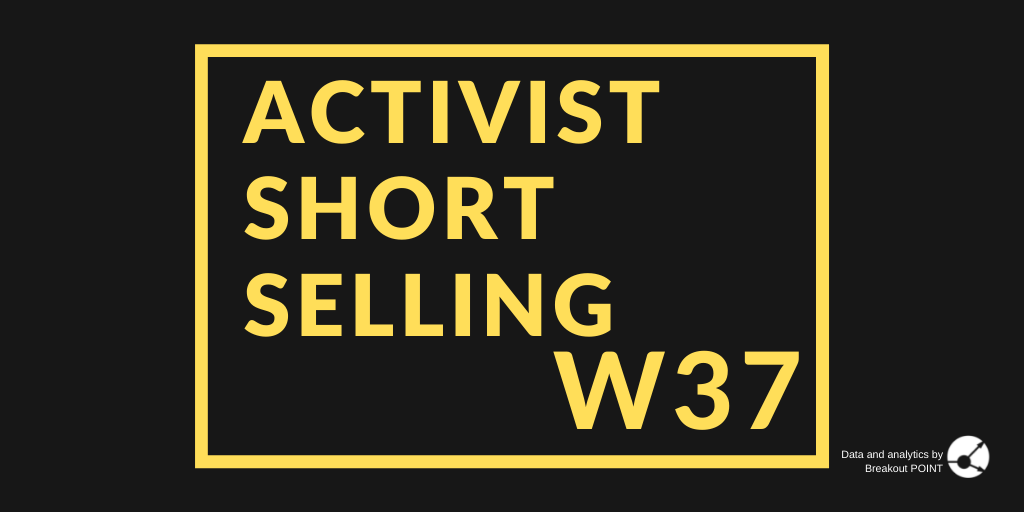 We have increased our short exposure to $AMC

This week’s we saw several stocks that moved in the right direction for the short-sellers. One of the biggest movers was a new campaign by Scorpion Capital. Berkley Lights (BLI) is down this week 23%. This medical device company was targeted due to allegations of dubious product and corporate governance red flags.

Most importantly, the report believes the company will not sell many more of their machines with a $2m price tag. The alleged reason behind this is that BLI failed to create any innovation with its product despite its language, which suggests the machine is well ahead of other market solutions. Scorpion believes the machine is based on old technology, and other much cheaper machines do the same job. According to the short seller, this is supported by a plethora of interviews of former employees, customers and academia.

Moreover, even if the machine is supposedly an innovation, the short-seller is startled to see that only a handful of devices have been sold in the past five years since the launch. As per Scorpion, the situation is also apparently getting worse as their revenue is slowing down. According to the short seller, this is not helpful when they are valued at roughly 27x sales, while the revenue composition also raises red flags (alleged possible start of stuffing the channels and lack of usage of older machines).

Due to all this, the short-seller sees a significant downside opportunity, with zero being a possible scenario here due to the severity of the allegations.

The market quickly reacted to the report, and since Scorpion released it, the stock is down about 17%, accounting for most of the drop this week. Twitter was split as per usual, but some other short-sellers have supported Scorpion as per below.

Can’t find anything good anyone says about $BLI products. Either it’s too expensive, doesn’t work well, the TAM is really small, or it’s gonna be obsolete in a few years.

Others went out and provided counter-arguments. Here is a thread by an analyst at ARK, a fund management company that owns shares in BLI.

The company did offer a comment on Friday via 8-K and called Scorpion:

Given the rapid reactions so far, it will be interesting to scrutinise future developments.

On the other side of the tracks, several stocks have moved against short-sellers. The most significant surge was seen in Cytodyn (CYDY), which has been up over 45% in the past five days. This biotech focused on COVID19 is a long-term short of several activists. While a lot of the downside has already transpired and their thesis was proven correct, the stock continues to be volatile. The recent run-up is likely caused by the excitement of data coming in from their Brazilian trial concerning COVID. Many short-sellers on Twitter were sceptical, given the background of the company.

Another stock that saw positive momentum is Lightwave Logic (LWLG) which is up over 13%. This stock was targeted by White Diamond Research due to allegations of dubious track record and product.

Most importantly, the report believes the company has been struggling to create a commercial product for the past 20+ years. The short seller also riased following allegations: They still do not generate any revenue from this. The competition also seems to be getting ahead and has institutional backing. LWLG is almost exclusively held by retail investors and apparently did not attract any serious partners. Moreover, the track record of the CEO is raising red flags. His past employment engagements were usually at companies that went nowhere.

The stock went up this week due to news of a world-record performance of its product. White Diamond acknowledged it but said that they would like to scrutinize the paper behind the achievement, which is, according to the short seller, nowhere to be found yet. Thus both bulls and bears are likely to talk about the stock in the upcoming days.

This week we also saw a new campaign by Muddy Waters. The activist targeted this $1.68bn bioplastics company due to allegations of dubious business model and misleading investors.

Most importantly, the report believes the company has oversold its dreams to the market...