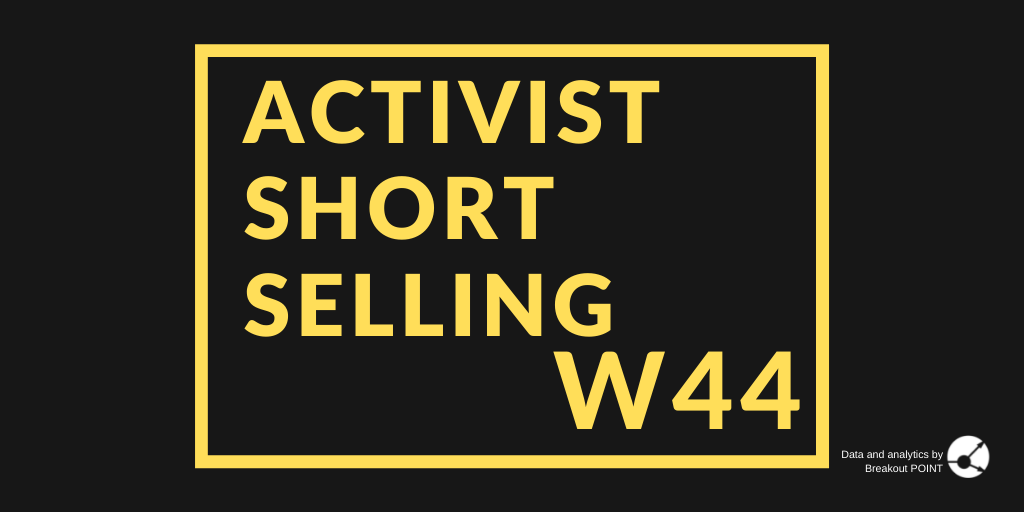 Preliminary data on illegal naked short selling is in: ~7M shares as of October 15th. This is in addition to the 8.1M shares officially short as reported by Nasdaq. We are committed to combating this. $ATER#StopNakedShorting

...there are all too many fraudsters, penny stock scammers, Ponzi scheme architects, and pump-and-dump cons taking advantage of investors...

This week's we saw several stocks that moved in the right direction for the short-sellers. One of the biggest movers was Triterras (TRIT) which is down more than 15% in the past five days. This Singapore-based blockchain company was most recently targeted by Mostly Borrowed Short Ideas due to allegations of dubious track record of the management.

The claims are now seeing some validation as the company failed to file its annual report within the proposed timeline. Some market participants dismissed this as a detail, but others said that the company is coming apart. It should be noted that the company recently released its own internal investigation, which apparently found nothing wrong with TRIT's accounting.

Another stock that has registered a significant decline is Lightspeed Commerce (LSPD). This Canadian-based SaaS roll-up was initially targeted by Spruce Point due to classic allegations of a troubled roll-up company.

Most importantly, the report believed the company has been inflating its potential while obscuring increasing pressure from the competition. According to Spruce, the company is trying to sell a future where its business model will thrive, but at the same time, LSPD has increased the number of its acquisitions apparently to mask organic declines in revenue growth. The revenue growth is crucial to maintain in order to give a picture of a healthy business with plenty of runway.

It seems LSPD's earnings result confirmed a large part of the thesis as the stock sold off once the numbers hit the market. Spruce had this to say.

Initially, they saw a downside of up to 60%. So far, the shares are down about 20% since the initial report. Thus share price action seems to still be in focus of this short seller.

Spruce has been hitting gains in some other stocks as well. For example, Heska Corp. (HSKA) also sold off after it released its earnings.

Maybe $HSKA expectations were a little too high after all: Q3 revenue $60.2m vs $63.8m est. When you're priced for perfection as an industry leader, you better deliver

The company was targeted by Spruce due to allegations of poor business model and various other concerns.

On the other side of the tracks, several stocks have moved against short-sellers. Aside from SAVA, which we feature in the below section, one of the most significant surges was seen in Danimer Scientific (DNMR). This bioplastics company rose by almost 30% in the past five days. The stock was most recently targeted by Muddy Waters due to allegations of dubious business model and misleading investors.

Most importantly, the report believed the company has oversold its dreams to the market. As per Muddy Waters, the company originally purchased its key asset 13 years ago, and since then, they apparently do not seem much closer to scalable commercialization. Muddy points out several key claims made by DNMR (capacity of production, a type of pre-orders etc.) which do not hold up to scrutiny.

The market seemed to ignore the claims for now as the stock is going up, likely due to the overall macro picture where companies focused on alternative solutions are in favour.

This week we also saw two new campaigns, both hit Cassava Sciences (SAVA). This $2.3bn biotech was targeted by QCM and by a group of PhDs who formed to write an in-depth report. They both wrote about allegations of...