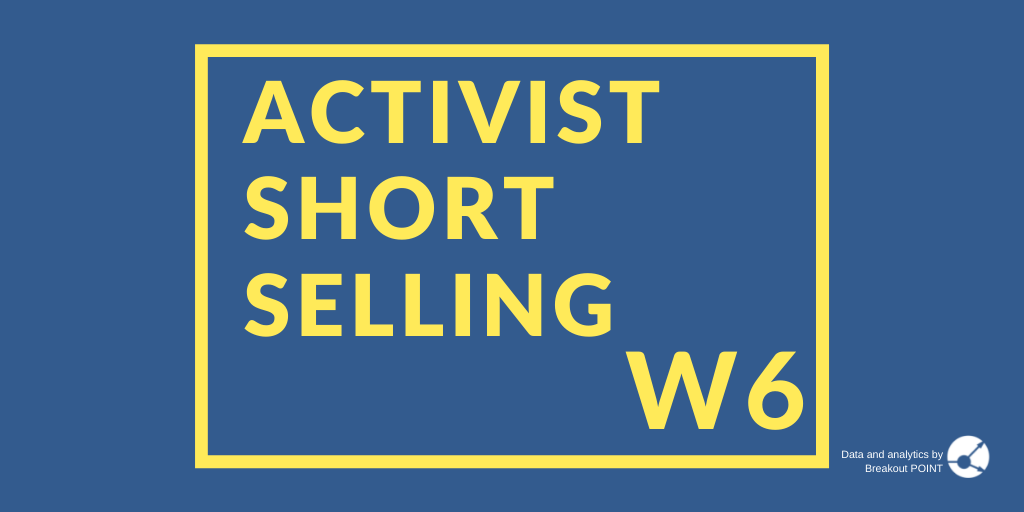 This week's we saw many stocks that moved in the right direction for the short-sellers. Among the biggest movers was Triterras (TRIT) which is down 45% in the past five days. The most recent report on TRIT was written by Mostly Borrowed Short Ideas who targeted this Singapore-based company focused on blockchain solutions due to allegations of dubious track record of the management.

Most importantly, the report believed the management team has not been transparent when it comes to their track record. Some past engagements were allegedly obscured from proxy statements. According to the activist, many of the entities also either went supposedly bankrupt or were persecuted by the SEC or are potentially fraudulent.

The thesis has played out and the downturn has accelerated in the past couple of days as the stock ended up being delisted from NASDAQ. This is the reason for the recent underperformance. The stock is down over 80% since the initial report.

Another large drawdown was seen in Astra Space (ASTR) which fell 26% in the past week. This space company was targeted by Kerrisdale late last year due to allegations of dubious business model and poor product.

Most importantly, the report believed this SPAC is unlikely to make enough breakthroughs to make it. According to Kerrisdale, the company has been slow in making progress and has so far had only a single test launch. As per activist, their product development is slow and they are using commercially available parts. This is apparently showing that they are also slow to create their edge in the space.

The thesis now seems to be accelerated as just yesterday the company's rocket chrashed minutes into its mission which sent the stock sharply lower. This likely confirms parts of Kerrisdale's thesis. The stock is down about 57% since the report.

On the other side of the tracks, there was some movement against short-sellers as parts of the market rebounded. One of the most significant surges was seen in CleanSpark (CLSK) which jumped over 27% in the past week. This bitcoin miner was most recently targeted by Culper Research early last year due to allegations of unsustainable business and promotional scheme which misled investors.

Most importantly, the report believed the company's latest bitcoin effort is questionable. As per Culper, they have acquired a company which others deemed economically unfeasible as the favourable electricity supply agreement faces a price hike. CLSK has been touting the low-cost mining opportunity, but this will only be present for a limited period of time.

It seems the thesis has largely played out as the stock is down over 70% since the report, however, the management is now signalling they are willing to explore new business ventures. This led to the recent jump in the share price.

The other notable surge was seen in Ebang (EBON), which we already highlighted last week. This time around the stock is up around 6%. This crypto-related Chinese-based company was targeted by Hindenburg due to allegations of misuse of capital and dubious related-party transactions. The thesis played out, but as with CLSK, the management is now trying to revive its business. The jump in the share price occurred due to news that one of EBON's subsidiaries received approval to become a cryptocurrency exchange.

The campaign around Cassava Sciences (SAVA) is unlikely to stop anytime soon. The initial reports were launched in November of last year due to allegations of insider enrichment scheme and dubious product offering. It was QCM and a group of PhDs who wrote the two initial reports. The stock is a rollercoaster ride since then. On the first day, the stock surged as some investors were trying to induce a short-squeeze. Then it quickly retraced and since then has been jumping around in a range as the various set of news permeated to the market.

The latest instalment of news is the Citizen Petition, which is a complaint by a lawyer and features several similar aspects to what the activists wrote about in their initial report, has been rejected by the FDA. The market understood this as positive and pushed up the share price by over 15%. However, the short-sellers were unfazed and said that the FDA only rejected this on procedural grounds. They continue to see a major downside.

$SAVA remains a complete scientific fraud that is going to have its rug pulled any day, and Mr. Market knows it..

The developments even led to r/wsb to be sceptical as per QCM's post which highlighted comments that seem to imply that bulls are now trying to push anything to keep the share price up even though the fundamentals might not be entirely supporting the case.

I just became a big fan of ⁦@Official_WSB⁩ reading the comments to this obvious, desperate pumping attempt by some $SAVA bull on gbrir chat. The comments are priceless. Thanks WSB you made my day! https://t.co/T7WHp63pNB

With even parts of r/wsb being sceptical of the stock...