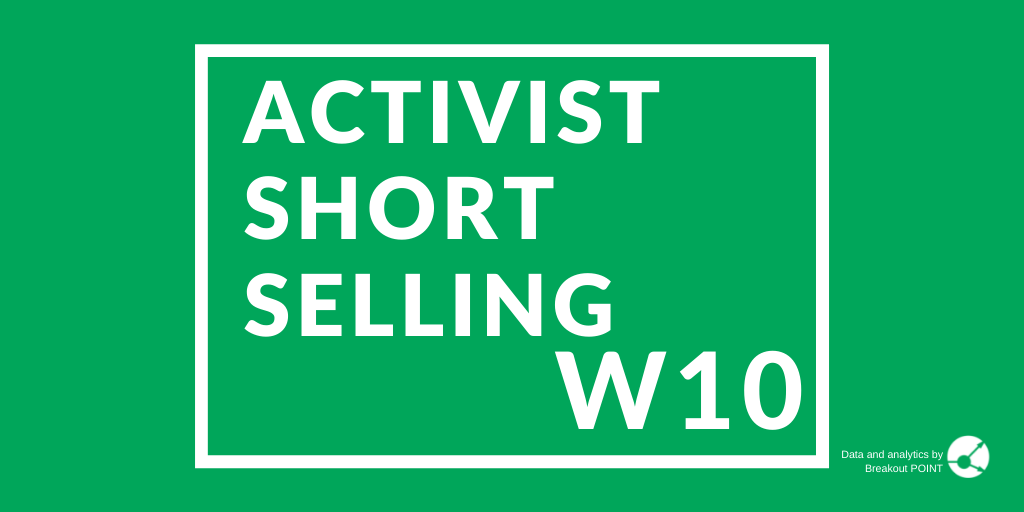 "who are currently under criminal investigation by the Department of Justice for illegal trading tactics".

Viceroy welcomes @KPMG_DE interim findings into the significant issues at @_adlergroup & await the full report. $SBB investors should take note of the consistent denials & reliance on valuers by #Adler management up to this point & demand their own investigation. https://t.co/g1eFK1XJRD

This week we saw several stocks that moved in the right direction for the short-sellers. Among the biggest movers was Ke Holdings (BEKE) which fell about 30.8% in the past five days. This Chinese-based company was initially targeted by Muddy Waters due to classic allegations of China Hustle 2.0.

Most importantly, the report believed the company inflated the value of its transactions and revenue to the tune of at least 70%. Through forensic due diligence of BEKE's platform, Muddy found discrepancies in store and agent counts as well through their program scraping BEKE's online data.

It seems the thesis might start to play out. The stock dropped due to its Q4 earnings which saw a significant drop in the gross margin which could eventually be tied to Muddy Waters' allegations. In any case, the short-seller continues to believe BEKE is a fraud as per the below tweet.

BEKE is now down 46% since Muddy wrote the first report.

Another large drawdown was seen in TROOPS (TROO) which ended up down about 25% in the past week. Wolfpack Research targeted this Chinese-based company due to allegations of fraud and serious corporate governance breaches.

It seems the allegations are now weighing down on the stock as the market might be open to selling-off stocks with plenty of alleged red flags. There does not seem to be any particular reason for the drop in TROO, but it likely just shows the general negative trend of the shares. The stock is down 57% since Wolfpack's initial research.

On the other side of the tracks, there was some movement against short-sellers. One of the most significant surges was seen in Triterras (TRITF) which jumped over 194% in the past week. Initially, it was Mostly Borrowed Short Ideas who analyzed the company. The short-seller targeted this Singapore-based company focused on blockchain solutions due to allegations of dubious track record of the management.

The thesis played out as the stock went down 86% and got delisted from Nasdaq, however, it seems the company is trying to get a second life after filings 2021 results which show significant increases in revenue. This caused a strong rally. That being said some traders are pointing out that audited 2020 results have still not been filed.

Another interesting rebound was seen in Purecycle Technologies (PCT). This recycling plastics company was targeted by Hindenburg due to allegations of dubious business model and questionable track record of insiders.

Most importantly, the report believed the company is unlikely to ever generate much shareholder value. As per Hindenburg, their purported technology was not featured in a single peer-reviewed study so far. This questions their ability to outcompete the many other businesses trying to revolutionize the recycling of plastics.

It seems the market is open to giving PCT another chance as oil prices have gone up and investors might be forming an opinion that PCT's tech might actually benefit from all this. The stock jumped in the recent days due to an optimistic outlook given during Q4 conference call. The company is expecting to start the commercial process in the second quarter of this year. It will be interesting to see whether PCT can actually recoup some of the 63% downside it is now showing since Hindenburg's initial report.

This week we also saw one of the most prolific activists of past years launch its third campaign this year. This time around, the activist targeted Natera Inc. (NTRA), a $5bn molecular testing company due to allegations of deceptive billing practices.

Most importantly, the report believes the company is using billing practices that could amount to insurance...