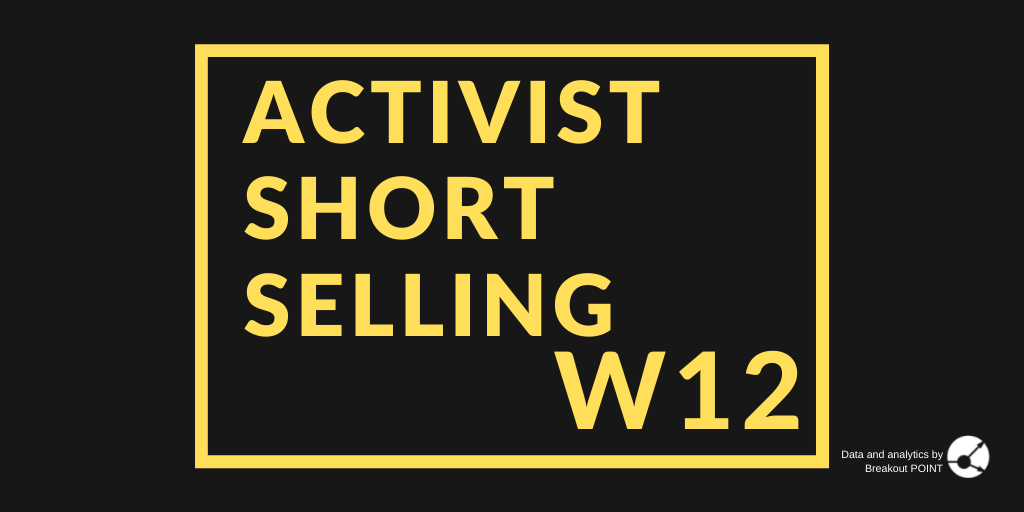 Zentek $ZTEK up 25% on no news. Recently uplisted to Nasdaq with a new ticker, this former junior miner and now IP development company has a market value of $300m USD but owns no patents and only generated $705k in revenue last year.. See our report here:https://t.co/MEIGnQjZmt

This week we saw several stocks that moved in the right direction for the short-sellers. Among the biggest movers was The Metals Company (TMC) which sunk 42% in the past five days. TMC is short of Bonitas from last year. The short-seller targeted this mining company due to allegations of dubious corporate governance.

Most importantly, the short-seller shared a tweet that alleges the management has siphoned off $43m to undisclosed insider investors via an acquisition. Moreover, according to Bonitas, the company apparently artificially inflated their expenditures numbers.

Since that short call, the shares are down more than 57%. The reason for the recent downturn is likely connected to the earnings report which might confirm the overall bearish perspective of the company as outlined by the activist. Retailers remain positive as many are touting TMC due to the recent macro events surrounding Ukraine.

Another large drawdown for Bonotas was seen in Agrify (AGFY) which dropped about 6% in the past week. This is in spite of almost 20% surge on Friday. This is another Bonitas target of late 2021. The short-seller wrote about this cannabis-related company due to allegations of undisclosed related-party transactions.

Most importantly, the report believed the company has been dealing with entities that are either shareholders of AGFY or are owned by insiders of the company. According to Bonitas, several entities were apparently created just a few days before AGFY engaged with them and they still do not have an operating business according to Bonitas, while a large portion of revenues of AGFY come from these supposedly dubious entities.

The thesis is now playing out as the company announced disappointing guidance which sent the shares lower. That being said, given the small market cap, AGFY is likely to be volatile going forward. Some retail bulls are still around and believe the fundamentals, while cannabis again became a popular narrative among retail investors. The stock is now down 62% since Bonitas' initial report.

On the other side of the tracks, there was some movement against short-sellers. One of the most significant surges was seen in Gamestop (GME) which shot up over 60% in the past five days due to the market's renewed interest in all things meme. Activist short-sellers were commenting on this infamous meme stock on plenty of occasions. Citron infamously shared their short before the big squeeze in early 2021. That being said there is no active campaign as of now.

Another interesting rebound was seen in Lilium NV (LILM) which rose almost 50%. This electrical aerial vehicle company was targeted by Iceberg Research just last week. The activist wrote about LILM due to allegations of poor product and dubious business model.

Most importantly, the report believed LILM's technology is not sufficient to produce a product that is going to fit the compliance created by aviation regulators. According to Iceberg, the company was not able to conduct many testing flights and there are apparently serious questions about battery capabilities, while the CEO did not have any aerospace experience prior to starting LILM.

It seemed Iceberg could celebrate early as the stock plunged heavily in the first week. However, this week the tables turned as the stock started to rebound and is up more than 15% since the initial report. This is somewhat peculiar as there has not been much news. The company did not formally respond to the short-seller, nor did it file a material SEC report. Retailers are also relatively quiet, while some are attacking Iceberg, there has not been a huge movement.

Due to the lack of meaningful business developments, it will be interesting to see how the stock fares in the future.

This week we also saw the return of Blue Orca who released their first activist campaign of 2022. They targeted Li-Cycle (LYCI) a $1.4bn recycling company due to allegations of poor corporate governance, dubious business model and questionable accounting.

Most importantly, the report believes the company is using...