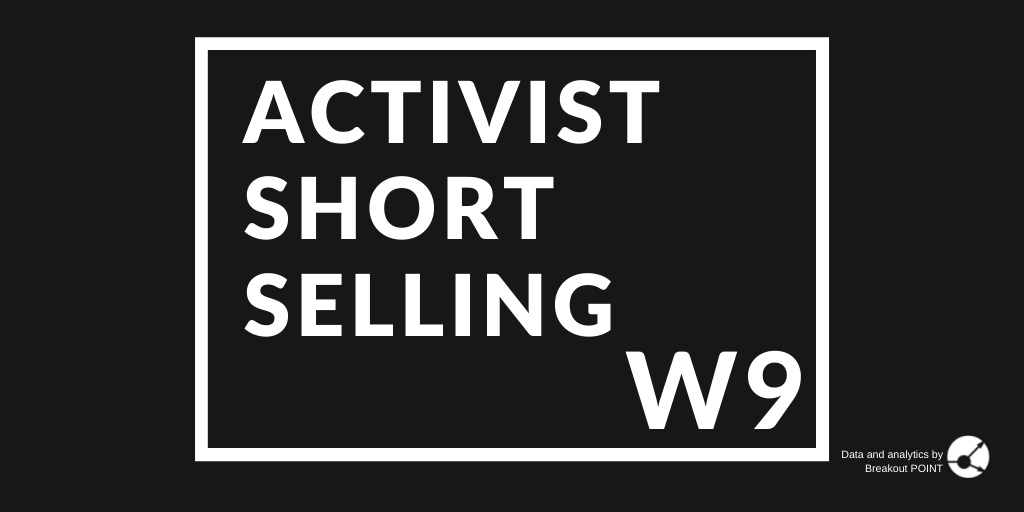 This week we saw several stocks that moved in the right direction for the short-sellers. Among the biggest movers was Lordstown Motors (RIDE) which fell more than 28% in the past five trading days. This EV stock was initially targeted by Hindenburg due to allegations of inflated business opportunity.

Most importantly, the report believed the company has touted many contracts which are dubious or are allegedly not finalized. Some of the largest customers of RIDE are based out of dubious addresses and do not have much history of being in business, much less having the capacity to order tens of thousands of EV vehicles. Others have told Hindenburg that they just considered buying from RIDE and they did not commit to anything.

The thesis largely played out as the stock is now down 87% since the initial report. The company released its 10-K on Monday and GM confirmed the sale of its RIDE stake. This alone already pressured the shares, but the CEO dumping about $13.5m worth of stock, sealed the ugly week. Hindenburg noted that the founder has plenty of more shares to go.

Another large drawdown was seen in Tusimple Holdings (TSP) which fell 23% in the past week. Initially, it was Grizzly Research who targeted this China-based autonomous driving tech company due to allegations of dubious product and promotional behaviour.

Most importantly, the short-seller believed TSP could be the next Nikola. TSP apparently also misrepresented their tech capabilities and their pre-orders. The company touted they have over 5,000 orders which could generate over $400m of revenue. However, Grizzly believes most if not all orders are easily refundable and are not serious commitments. The SEC inquired about this, and TSP decided to drop the revenue generation forecast altogether. Presumably to avoid legal liability.

The thesis is seemingly playing out as the stock is now down 67% since the initial report. Now it seems the allegations have further support as the company announced a CEO change which caused the slide. Grizzly noted that despite this allegedly dubious CEO change, Ark continues to buy more:

New lows for $TSP today after CEO and Chairman announced their departure. https://t.co/qz36thwCGg@CathieDWood decided to buy millions of shares shortly after our critical report. https://t.co/MxIzAUf236
Let's wait and see how this plays out. pic.twitter.com/8pwbVdm8Fw

On the other side of the tracks, there was some movement against short-sellers. One of the most significant surges was seen in Darktrace (DARK) as the stock jumped 25% in the past week. This cybersecurity company was initially targeted by ShadowFall due to allegations of a weak business model.

Most importantly, the report believed that the company's business is driven by promotional sales techniques that acquire new clients at a significant discount while customer retention is falling. As per ShadowFall, the business model itself is "watery-thin".

At first, the stock did go lower and was as low as 23%, but since the start of the war in Ukraine, the shares have rebounded strongly. This is because the market is expecting the company is going to be able to catch some of the increased demand for cybersecurity services given Russia's capabilities. ShadowFall did not comment on the development so far.

Another interesting rebound was seen in Danimer Scientific (DNMR) which jumped 23% in the past five days. This bioplastics company was most recently targeted by Muddy Waters due to allegations of dubious business model and misleading investors.

Most importantly, the report believed the company has oversold its dreams to the market. The company originally purchased its key asset 13 years ago, and since then, they apparently do not seem much closer to scalable commercialization. Muddy Waters points out several key claims made by DNMR (capacity of production, a type of pre-orders etc.) which do not hold up to scrutiny.

The thesis seemed to have played out as the stock is down 71%, but it seems the bulls are getting another breath after DNMR's latest earnings. The stock posted numbers that beat estimates and investors were getting excited as the company noted future potential.

This week we also noted new developments in the recent campaign of Viceroy who targeted a Swedish-listed real estate company, Samhallsbyggnadsbolaget I Norden (SBB). The original report talked about allegations of undisclosed related-party transactions, dubious accounting and rampant insider self-dealing.

Most importantly, the report believes the company's assets are frequently purchased through undisclosed...