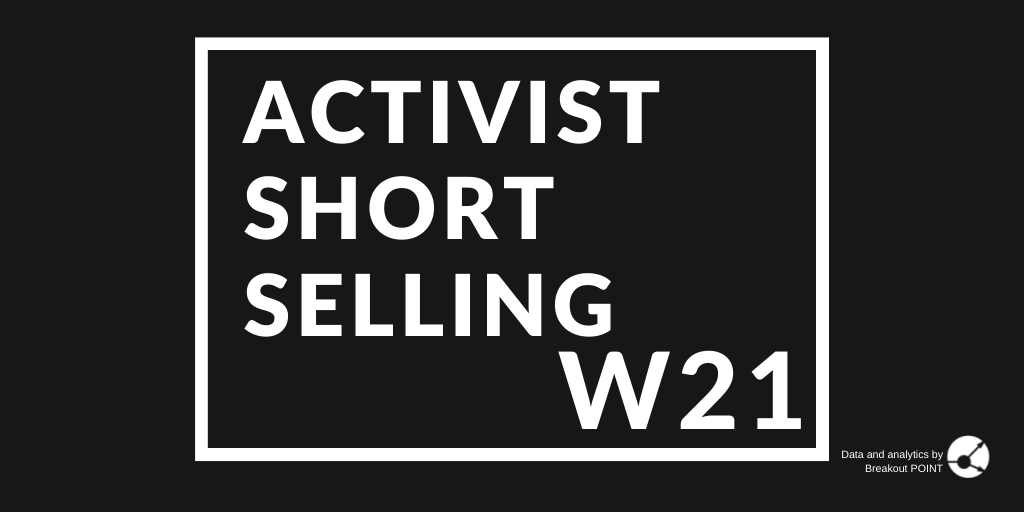 We have prepared a full report on Serhat Gumrukcu and his career as a lifelong con artist, which we are releasing next week.

It is easily the most deranged story we have ever researched. We are short $ENOBpic.twitter.com/BInLrYLT88

This week we saw several stocks that moved in the right direction for the short-sellers. Among the biggest movers was ESS Tech (GWH) which sunk about 17% in the past five days. Initially, it was Bonitas who targeted this energy storage company due to allegations of a dubious track record.

Most importantly, the report believed this SPAC company lied to its investors about their previous customer engagements of the acquired business. The company highlighted six customers which previously saw its tech deployed. Bonitas found five of these projects abandoned and the sixth one generated no revenue last year.

It seems the thesis is playing out. The stock is down almost 75% since the initial report. However, Bonitas eventually saw further downside as the company is likely to continue to burn cash and fail to produce much revenue from its customers. The initial target was about 85%. The recent move does not seem to be based on much. The company released earnings two weeks which likely failed to spur any interest in the shares.

Another drop was seen in Sofina (SOF) which went down 14.4% in the past five days. Initially, it was Viceroy Research which targeted this European venture capital firm due to allegations of overvaluation.

Most importantly, the activist raised questions about the valuation of a specific Indian investment which might be obfuscating its real value proposition. Viceroy said that Sofina is not a scam but mentioned that such investments raise doubts about Sofina's ability to create value for its shareholders.

It seems that Viceroy is now close to hitting its intended price target for SOF. Initially, the activist saw a 25% downside and the stock is now down 23% since the call. It seems Viceroy will continue to cover the situation, but it is not clear whether the activist believes there is further downside after their first price target.

This is why investors should do their research. Near 4100 investors have evidenced fraud at #BJUS. #Sofina need to make a statement. #Fraud. @viceroyresearchhttps://t.co/nrtLLl0u2S

As per the tweet, the increasing doubts about the validity of some of SOF's investments is the culprit behind the recent price drop.

On the other side of the tracks, there were several movements against short-sellers. One of the most significant surges was seen in View (VIEW) which went up 70% this week. This glass tech company was targeted by Jehoshaphat Research in June of last year due to allegations of a poor business model and weak balance sheet.

Most importantly, the report believed the underlying economic model is not feasible and the company will continue to burn cash. Their smart glass is being sold at a deeply negative gross margin and the company is unable to increase prices.

The stock already hit the price target of the campaign a while ago (-62%), but the activist continued to raise questions about the future of the company. Now it seems the market is trying to bid up VIEW from the bottom, but this might be led by technical factors and traders searching for the next short squeeze. The company announced they will finally showcase their Q1 on the 31st of May after several delays. The activist did not yet comment on this.

Most importantly, the tweet thread talked about how the current team does not seem to have much experience with the cannabis industry. As per the activist, the CFO was also previously employed by a blockchain company which had to...