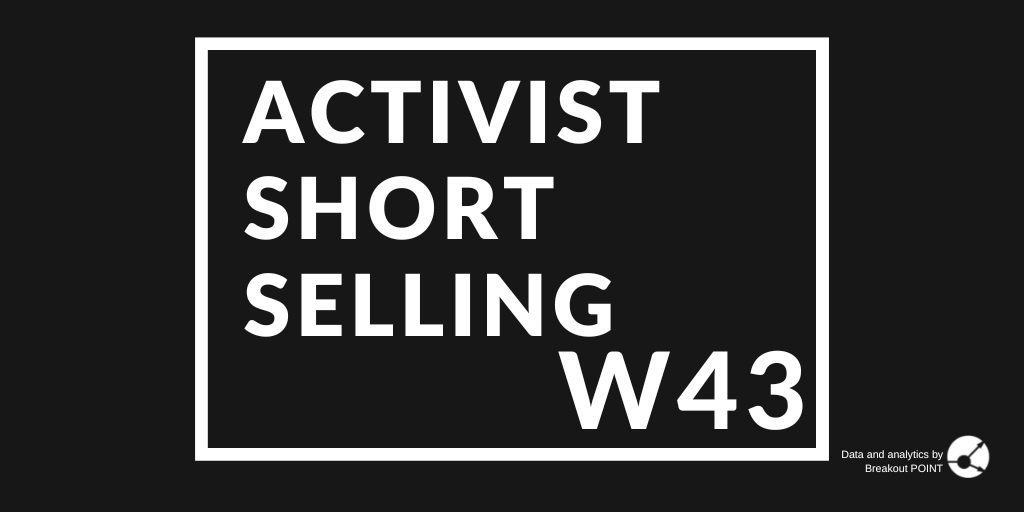 With heavy hearts we must share that we have lost one of The Pack. Matt Farrell, known to many as @WillauerProsky has passed away. Optimistic & loyal, Matt was an indefatigable advocate for investors (Matt loved big words).He will be sorely missed, esp by those who knew him best

@BoatmanCapital "instructed lawyers Grosvenor Law to demand both the ASX and ASIC investigate AVZ for allegedly misleading the market and failing to follow its disclosure obligations"... https://t.co/t9sipLA9tA

This week we saw several stocks that moved in the right direction for the short-sellers. Among the biggest movers was Core Scientific (CORZ), which dropped about 79% in the past week. This hosting and mining company was targeted by Culper Research due to allegations of dubious transactions and overvaluation.

Most importantly, the report believed the company went public by buying a bitcoin mining entity that was formed just a few months before CORZ acquired it. The management apparently tried to paint a favourable picture for the price tag, but the entity was initially funded with $58m and then bought for $1.46bn in seven months. This is allegedly dubious and creates significant questions about the transaction.

The short thesis has played out. The stock is down 97%, and Culper was able to share the following update with the market.

$CORZ disclosed in an 8-K this morning that the Company has stopped making payments due in the next few days, hired restructuring advisers, and anticipates existing cash will be depleted by the end of the year.

On the other side of the tracks, there were only a few meaningful movements against short-sellers. One of the most significant surges was seen in Mullen Automotive (MULN) which jumped 37% in the past week. Initially, it was Hindenburg who targeted this $651m EV company due to classic allegations of pump and dump scheme.

Most importantly, the report believed MULN's hyped solid-state battery tech is unlikely to generate much value. Recent PR, which talked about the performance, was apparently rehashed news from 2020. The testing partner also alleges that MULN misrepresented the results. MULN also apparently does not have the needed EPA certificate even to produce its own EV vans.

The short thesis has definitely played out, as the stock was at one point down over 90%. However, it seems the market is now eager to give MULN a second change. The stock has started to rebound and is down 'only' 80% on the back of several seemingly positive developments and big retail investors focus. However, some caution that Hindenburg's allegations are still firmly in place and nothing changed.

Most importantly, the report believes the company is unlikely to be able to finish its...