During H1, three most active short sellers contributed about 30% of all new short calls These are: White Diamond with 11 shorts, Spruce Point with 9 and Citron with 5.

With 55 shorts, US (avg. stock performance -9%) tops our list of the most targeted countries/regions. This is not surprising and was observed in previous years as well. In Asia, we recorded 16 new major short calls (avg. -8.7%), which is already a higher number than for whole of 2018. The biggest decline in number of short calls, versus a year ago, was recorded in Canada with only 3 shorts, so far. However, Canada shorts were on average rather successful with targeted stocks performing -15.3%. We noted 2 short reports on Australian companies, most notably, a GMT Research report on CIMIC Group, Australia's biggest construction group.

Healthcare sector tops all sectors with 26 shorts and, from short-sellers perspective, a formidable average stock decline of 18.2%. Somewhat fittingly, biotech companies and activists short sellers were recently in the focus of the Nasdaq president’s commentary (ref. Pensions & Investments).

Out of 82 short calls, 18 resulted in a stock drop of more than 25%. Average initial market cap of these 18 calls was about $800 million, indicating that vast majority of the most successful short calls targeted firms under one billion in market cap. 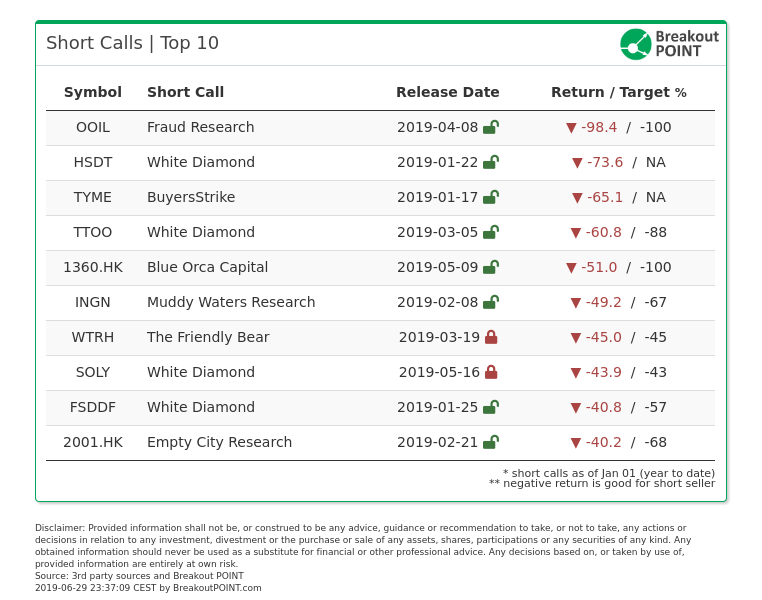 Top 5 calls from the table above focused on companies with a market capital that was under $1 billion when short call was initiated, and, with the exception of Blue Orca's report on NOVA Group (ex Mega Expo Holdings), all focused on US.

When looking at stocks above $1b in initial market cap, top 3 activists are: Muddy Waters, Inogen -49.2%; The Friendly Bear, Waitr Holdings -45%; and Aurelius, Vanda Pharmaceuticals -25.6%. Interestingly, Muddy Waters is not the only activist that had Inogen in focus. Citron Research issued a report focusing on Inogen back in May'18 (stock above $170) and, several days after Muddy's report, a follow-up report in Feb'19 (stock around $140). However, Citron's report does not pop-up in our list of new H1-2019 reports, because the first Citron's Inogen report appeared in 2018.*

The only activist that appears multiple times in top 10 is White Diamond. They typically focus on companies with a market cap of several hundred millions. White Diamond had a number of very successful short calls in H1 and manage to land 4 spots in our top 10 list.

Stork, Grizzly and a whole Wolfpack

We noted a number of newcomers that launched their first short campaigns in H1. Among the most successful short calls by newcomers are:

* Note: Presented short selling data is based on public activist short selling data that Breakout Point collected and compiled. Presented data is as of close on 2019-06-28. Our default methodology is applied, that measures % change in stock price versus the close prior to a short call. Negative returns, i.e. stock price drops, are good for the short seller. Follow-ups of recent reports by the same activist are not included when counting number of the new short calls. Headquarter location and not listing location is taken into account when determining company’s country. Updated on 2019-09-2019 with mention of Citron's Inogen reports.