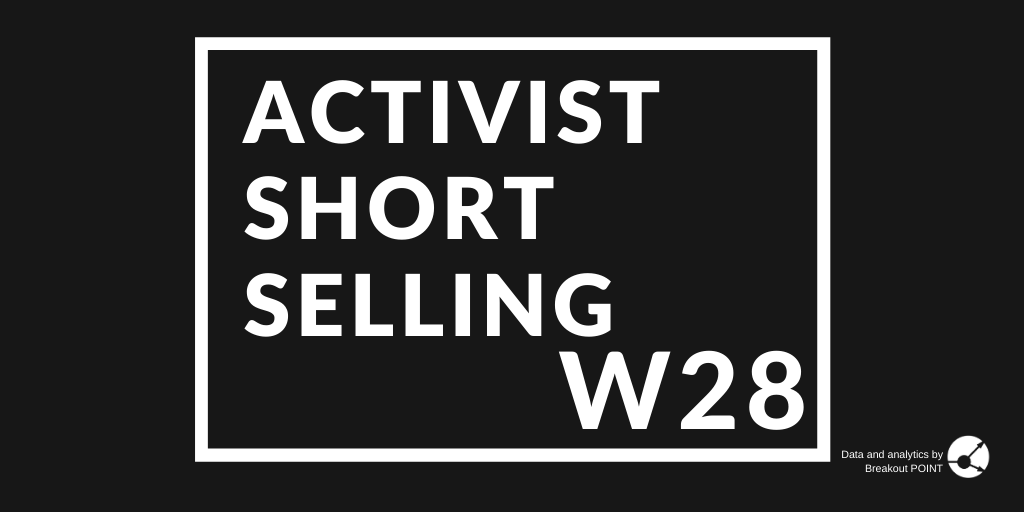 State of short selling: We recorded 91 major activist short reports in H1-2020. A truly unique period that left short-selling in a "logic versus liquidity" state, as characterised by Muddy Waters.

Muddy Waters vs China Hustle ‘enablers’: On July 9, the short-selling community was focused on a panel hosted by the SEC around the topic of investment risks in emerging markets, especially in China. GSX Techedu was singled out by Muddy Waters in their open letter to the SEC Chairman. They also called for more accountability and financial responsibility of global auditors:

‘If global auditors are happy to rent their names to entities that are prohibited from cooperating with U.S. regulators, the lessors of these monikers should bear responsibility similar to how parents are often financially responsible for the misdeeds of their minor children.’

No short-selling at Lansdowne: A well-known UK money manager, Lansdowne, is planning to shift away from short selling. We noted some writings on the wall about Lansdowne and their short selling strategy. Almost 90% of their European short disclosures since May were to reduce short positions. From a purely data perspective this is a (semi) significant event, as Lansdowne was regularly among top 10-20 most active short position holders in our records. We run a related poll:

Lansdowne shifting away from short-selling is

Turkey bans six banks from short selling: Unusual move in Turkey, where short selling ban was finally lifted, but then re-imposed only on six banks, for a duration of one to three months. These six are: BARCLAYS, CREDIT SUISSE, MERRILL LYNCH, GOLDMAN SACHS, JPMORGAN, and WOOD AND COMPANY. Lack of timely short selling notifications to the regulator was mentioned as a reason.

This week’s major moves included a sharp downturn for boohoo (BOO) which is down over 30%. The company was first targeted by ShadowFall Research which saw BOO’s corporate governance as a material red flag, especially related-party transactions.

The downturn was however brought by something the short-seller did not raise in the initial report. The company was accused by the media to operate a factory that should have exploited its workers. While the weekly performance is negative and the shares are now down about 14% since ShadowFall’s campaign, the shares started to rebound on the company’s promise to mend its supply chain.

On the other hand, we saw VBI Vaccines (VBIV) surge over 30%. This biotech focused on finding a vaccine for COVID19 was targeted by Culper Research who alleged VBIV’s key asset, hepatitis-B vaccine, is not connected to COVID19 and has a dubious track record. Moreover, VBIV should have also tried to find a vaccine for the Zika virus and released a slew of press releases similar to what the company is showing now.

For now, though, the thesis does not seem to be hitting the needed catalyst. The company kept on releasing new info about their products which seemed to have excited the market. The shares are up over 100% since Culper's report.