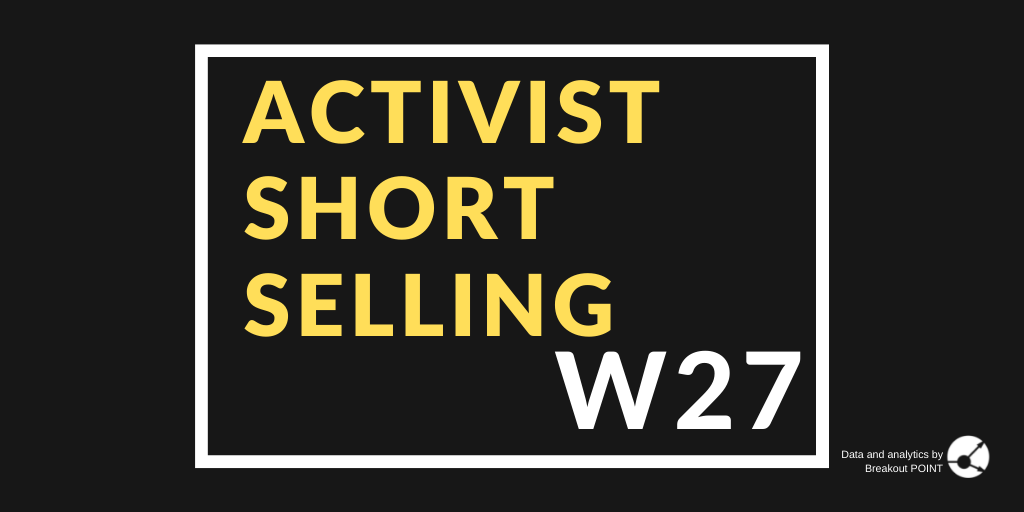 1) We are short Veru Inc $VERU, and have published a new, updated report on our website https://t.co/4MDshx5BeT

"Never easy to short stocks already down 50%+ from highs" pic.twitter.com/IyE52fPNXs

This week we saw several stocks that moved in the right direction for the short-sellers. Yet again, among the biggest movers was Enochian Biosciences (ENOB) which dropped another 6% in the past week. This biotech was recently targeted by Hindenburg Research due to allegations of dubious management. Most importantly, the report believed the co-founder and key asset of the company is a fraud and a repeat felon. As per Hindenburg, the co-founder does not seem to have any medical degree despite touting many pre-clinical assets which have been licensed to ENOB from co-founder-controlled entities among other things. According to the activist, the co-founder siphoned over $20m from shareholders over the years. We would also like to point out work by Sharesslueth on ENOB that they publiched on the same day as Hindenburg:

In March this video appeared. It shows pictures of me, my wife, and the home we share with our kids.

I can't definitely prove that the person who created it was arrested last week for hiring a hitman who killed a father of seven in Vermont. But I'll try. pic.twitter.com/I6cfjtlR96

We highlighted ENOB last week as the stock got hit by a flurry of bad news. This time around it seems the market is simply accepting that the stock might not be so quickly recovering from all the allegations created by associating with the co-founder of EBON. There was no news suggesting anything different.

On the other side of the tracks, there were several movements against short-sellers. One of the most significant surges was seen in Faraday Future (FFIE) which went up 52% this week. This China-based EV company was targeted by J Capital due to allegations of dubious business model and questionable corporate governance.

Most importantly, the report believed the company is likely to yet again postpone its EV launch. As per activist, FFIE has constantly pushed the deadline further. Now it is being sued by a slew of unpaid suppliers and apparently, the Chinese court froze some of its assets. FFIE talked about having over 14,000 pre-orders, but earlier this year it quietly dropped this number.

The thesis has largely played out as the stock ended a protracted downside trend without much hope for a rebound. However, just in the past week, the stock became a favourite among the short-squeeze crowd due to the technical setup. This has led to a sharp increase in the stock. There does not seem to be any fundamental news that would invalidate JCap's initial research. The stock is down only 28% since the activist raised the red flags late last year.

Another stock which went against the short-seller thesis was Mesoblast (MESO) which is up about 20% in the past five days. Initially, it was Alpha Exposure who targeted this biotech due to allegations of obfuscation and inefficient products in the pipeline.

Most importantly, the report believed the company mistreated the proper guidance for statistical analysis when it comes to the endpoints for MESO's key trial. This is likely to further support the notion that the trial will not be accepted and will have to be re-run. This could cause significant cash issues as the previous Phase 3 has run six years.

The thesis has worked out as the stock was down over 80% at one point, but now MESO is made somewhat of a comeback. It is not clear why. The market sold the stock after earnings and the company has been quiet regarding new business developments. Twitter chatter is mostly confined to technical analysis.

Stocks are down, but activists see further downside opportunity

This week we also saw several activists post updates about their campaigns. All of these stocks are already down, but given the updates, further downside is seems to be on activists' radars...